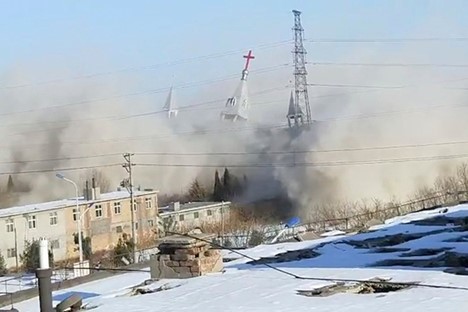 In the past, Pastor Wang and Preacher Yang worked for Shanxi Normal University. In 1998, they resigned from their jobs and started serving the Church full-time. Preacher Yang, a fifth generation Christian and highly respected among house churches in the Linfen area, became a follower of Christ at a young age. Pastor Wang, who authored more than 10 biblical books. presented in-depth analysis on China’s house Churches. In his book, Theology of the Cross, based on Martin Luther’s Theology of the Cross, he developed four theological principles for China’s house Churches. Since 1998, as the couple and other church leaders have nurtured the Church, it grew from less than 100 members to more than 50,000.

During this time of growth which surprised local government officials, the Church has held to authentic Christian faith. They refused to join the Three-self Church, and register with the Religious Affairs Bureau. Consequently, CCP authorities constantly persecuted and suppressed members. Since 2004, local government officials have frequently cut off their water and power.

In 2009, the renown September 13 crackdown occurred. At approximately 3 am on September 13, 2009, Fushan County CCP authorities ordered more than 400 police to raid Golden Lampstand Church and its evangelical shoe factory. Police officers brutally beat Christians who had been sleeping in their apartments, injuring more than 100 people to the point some lost consciousness and required emergency medical care. Authorities contracted for bulldozers and excavators to destroy buildings, appliances, cooking wares and other Church possessions.

That afternoon, thousands of Christians gathered in front of the county government office to pray for officials and appeal for them to repent. During the afternoon of September 19, 2009, the head of Linfen Public Security Bureau reached an agreement with Pastor Yang and two church leaders. Government officials offered to pay ¥1.4 million (215,849 USD) for the church to rebuild the buildings CCP officials had destroyed. Authorities refused, however, to release the Christians who had posted forced demolition videos online whom they had arrested.

CCP authorities also threatened to cancel subsistence allowances for those Christians who continued to attend the Church. They also warned Shanxi Normal University students—Do not attend Golden Lampstand Church. Due to these constraints and critical conditions, Preacher Yang and other Church leaders rejected the ¥1.4 million compensation, hoping to resolve problems by petitioning higher level authorities.

Officials wanted me to sign the paperwork
to sell the church for ¥10 million. They claimed our Church was illegal and
asked us to demolish it. I told them to stop talking about that. Brothers and Sisters
paid more than ¥10 million to build the Church. I did not pay any money, I told
them… “You need to ask our Brothers and Sisters. If they agree to sell the Church,
you give the money to them. If they disagree, I cannot do anything. I do not
have the authority to make the decision for them.”

On November 30, after CCP authorities charged five more
Church leaders with “assembling a crowd to disturb traffic order,” the court sentenced
them to two years reeducation through labor.** These Christians include:

ChinaAid sources reported that as Ms. Yang Caizhen “lost” one tooth, she appeared to have been beaten during her interrogation.

After court sentences, CCP officials banned Golden Lampstand Church’s more than 30 gathering locations. Authorities released Pastor Wang from prison in 2012. They released Preacher Yang in 2016. Prior to her imprisonment, Preacher Yang had beautiful black hair. When released, her hair had turned white. While in prison, Preacher Yang continued her worship and service. Despite being imprisoned, she said she will continue to share God’s gospel.

On January 9, 2018, when CCP demolition workers bombed Golden Lampstand Church, they completely destroyed the building, as well the basement and the emergency evacuation exit. Later, workers transported the broken bricks from the scene. According to one witness, police officers erected a line of police tape around the demolition site to prevent people from getting too close or photographing or videoing the scene.

Many Christians who watched the demolition from a distance cried.

This year, 2021, five years after CCP authorities released Preacher Yang, government officials have initiated another round of massive arrests against Church leaders. The CCP has escalated its persecution against house Churches, and Churches. Authorities primarily target those like Golden Lampstand Church, and Christians who decide to “hold fast” to the faith… those who refuse to compromise the gospel of Jesus Christ—despite and even when facing another round of CCP persecution.

*** Some Christians expect CCP authorities to impose fabricated financial-related charges against this
church.

Police arrest nine leaders from Golden Lampstand Church,
an influential House Church in Taiyuan City
###
Let us hold fast the confession of our hope
without wavering,
for He who promised is faithful.
~ Hebrews 10:23 (NKJV)
China Aid exposes abuses in order to stand in solidarity with the persecuted and promote religious freedom, human rights, and rule of law. If you wish to partner with us in helping those persecuted by the Chinese government, please click the button below to make a charitable donation.