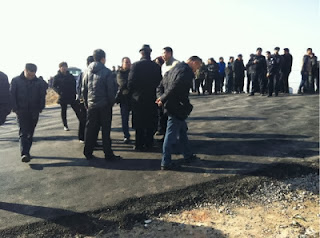 
(Nanle, Henan—Dec. 12, 2013) Fifteen defense attorneys were pushed and verbally abused by plainclothes police and government-hired “thugs” after requests to see their clients, the Nanle County Christian Church detainees, were denied, causing the 15 to engage in a hunger strike outside the Nanle County Public Security Bureau.

Since ChinaAid first reported on the situation (https://chinaaid.org/2013/12/breaking-nanle-county-christian-church.html), more information has become available. We have learned that as the lawyers were walking out the door of the Nanle County Detention Center, after their requests to meet with their clients had been denied, approximately 100 plainclothes officers and individuals the lawyers believed to be government-hired thugs began threatening, verbally abusing and shoving the lawyers.

One attorney, Chen Jiangang, had his cell phone confiscated. Meanwhile, the cell phone of a female church member who was present was confiscated and deliberately destroyed onsite.

The lawyers dialed emergency numbers for police aid. When the police arrived, the aggressors continued to provoke the lawyers and Nanle County Christian Church believers.

At some point, local police escorted the lawyers to Yangcun Township Police Station to take their statements regarding the incident. It was then that the lawyers, feeling that their right to practice law and their own safety couldn’t be guaranteed by the government, unanimously decided to engage in a hunger strike to protest the unlawfulness of the Nanle County governing and policing bodies.

The lawyers defending the Nanle County Christians are from all over China.

ChinaAid will continue to monitor the situation and relay more information as it becomes available. We strongly denounce the persecution and suppression of the Christians and their lawyers by the Nanle County government of Henan. ChinaAid calls on the government to immediately stop such illegal abuse and to return to rule of law and dialogue to solve the issue. In the meantime, we call on Christians worldwide to pray for the church in Nanle, for Pastor Zhang Shaojie and the other detained believers, who are being persecuted in prisons, and for the rights defense lawyers, who pursue social justice and protect the dignity of the legal system.