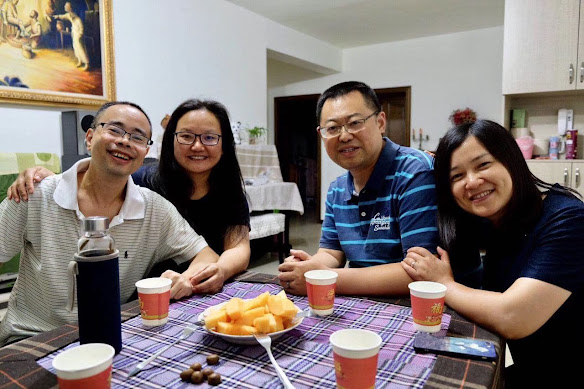 (Guiyang, Guizhou Province—May 25, 2021) At approximately 11 pm (Beijing time) on May 23, as Pastor Yang Hua of Guiyang Living Stone Church, planned to visit Christians in Qingdao, local Chinese Communist Party (CCP) police seized and transported him to their station. While officers detained Pastor Yang in their station, a leader of the Guiyang Yunyan District Party Committee punched and so severely injured him that an official phoned 120 [ER phone number in China]. Dispatched medical personnel then transported Pastor Yang to the hospital ER.
In 2009, more than 500 Christians originally established Guiyang Living Stone Church. Six years later in 2015, Guiyang City government officials forcibly shut down the building where the Christians worshipped. In early 2016, CCP authorities seized the church’s property and sold it to a commercial group for more than 5,000,000 yuan (779,909 USD)—a price much lower than its actual assessed value.
At that time, CCP officials seized Pastor Yang, falsely charged him with “deliberately divulging state secrets,” and sentenced him to serve 2.5 years in prison. Authorities did not release him until June 19, 2018, after he served the full term of his sentence. During Pastor Yang’s imprisonment, Wang Hongwu, his wife, publicly proclaimed that neither the CCP’s persecutions “nor attacks will shake my husband’s faith.”
In a sense after his release from prison, Pastor Yang remained imprisoned as police kept him under their relentless scrutiny. Members of his family revealed that local police intensify their surveillance on Pastor Yang Hua on a “sensitive” day or whenever a sign of a potential disturbance or trouble emerges. During those times, authorities have forced Pastor Yang to travel away from the area or hold him under house arrest.

Typically, when Guizhou hosted an international conference or a foreign consul visited Guizhou, authorities would transport Pastor Yang from the area. If they do not force him to leave, approximately 20 CCP officers would watch his place and guard his door. After Pastor Yang’s release from prison in 2018, State security officers drove to Chengdu, and escorted him and his family to Chengdu, Sichuan, where they met with Christian friends. Local police there also detained Pastor Yang for a short time before transporting him to Kunming for travel.

During late August in 2018, Pastor Wang Yi traveled to Guiyang to visit Pastor Yang. As they met, they encouraged each other to “hold fast to the faith.” Three months later, CCP authorities arrested Pastor Wang and imprisoned him.

Recently, after CCP police detained Pastor Yang and a leader of the Guiyang Yunyan District Party Committee brutally beat him, other Christians prayed for him. Please continue to pray for him, Pastor Wang, and others being persecuted, that they, as Pastor Yang encourages—hold fast to the faith.

Yu Bing, ChinaAid Special Reporter
###
Let us hold fast the confession of our hope
without wavering,
for He who promised is faithful.
~ Hebrews 10:23 (NKJV)