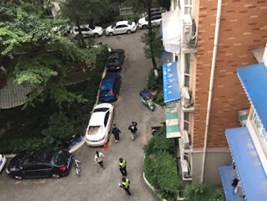 (Chengdu, Sichuan Province—Oct. 27, 2020) Prior to 8:30 a.m., Sunday, October 25, when Elder Li Yingqiang of Chengdu Early Rain Covenant Church attended online worship in his home, district police once again seized and transported him to the police station. Two policemen and an official from the Religious Affairs Bureau also visited Xiao Luobiao that morning before 8 a.m. at his home while he and his family worshiped online.

When officials asked them to turn off their computers and stop worshiping, Brother Xiao responded, “We worship at home and did not gather crowds to make trouble. Why can’t we worship here? By doing this, you are subverting the community.”
When Mrs. Xiao and Chen Yan asked whether it is illegal to worship online, the police said, “It is breaking the law.

After Brother Xiao asked officials to show their summons to him, they left but then returned at approximately 10:00 with a summons. Police refused, however, to divulge the reason for the summons.

Recently, officials forced Elder Li to delete all the tweets on his Twitter account and remove all followers.

On October 18, Xiao Luobiao also attracted police attention for participating in church Sunday worship services. At that time, officers detained him until late evening on October 20. Since then, police have routinely stalked, harassed and threatened Xiao, a Christian college teacher, his wife and two children. In response, Mrs. Xiao has documented events with phone calls to the police station and personal journaling.

When Elder Li arrived home after being detained on October 25, his wife, Zhang Xinyue, told friends that he felt safe and happy to be back. Xiao recounted, “Although still subjected to being summoned on the grounds of “participating in illegal activities,” thank the Lord, I have returned home safely. Officers treated me calmly and peacefully so I am safe and well. I brought the Bible, water and food with me to the police station. While authorities detained me, I memorized scriptures of today’s sermon. “But even if you should suffer for righteousness’ sake, you are blessed…” (1 Peter 3:14). “It is better then to suffer for righteousness than for evil. I hope that just as these words comforted me greatly, they encourage dear brothers and sisters as well.”