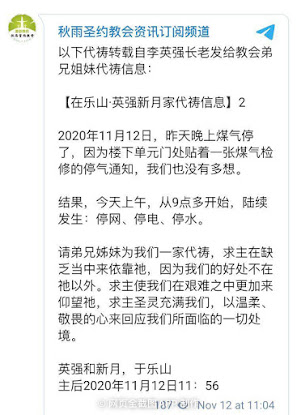 (Leshan, Sichuan Province—Nov. 13, 2020) During the morning of November 11, 2020, Yingqiang Li, elder of Chengdu Early Rain Covenant Church (ERCC), posted the following prayer requests on his Facebook page: “The natural gas was cut off at our family’s residence in Leshan the evening of November 11. At approximately 9 am, November 12, the internet, power, and water were cut off, one after another.” These actions appear to target Elder Li’s family with the intent to force them to move away from where they had rented two weeks previously. Prior to this, Chengdu police had expelled Elder Li and his family from their apartment. Police officers then escorted them to Leshan.

Ruiting Ren, a fellow Christian from Early Rain Covenant Church who fled to Taiwan last year, owns the apartment Elder Li’s family rents. Leshan police reached out to Ren’s aunt on November 5, asking her to repossess the apartment keys from Li’s family, and force them to move. Police also asked about the location of the property’s ownership certificate.

At noon November 6, Ruiting Ren communicated with her aunt Ren, and told her Li’s family are not bad people; that she will not terminate their lease. Ms. Ren stressed she will not force Elder Li’s family to move because of police’s threats. Ms. Ren’s aunt told her the following messages police had related:

About noon on November 7, Ren’s aunt and another unidentified person visited Elder Li at his home. They asked him to vacate the apartment by 6 pm. After that, Ms. Ren lost contact with her aunt.

As December 9, the second anniversary of Early Rain Covenant Church’s crackdown, Chengdu, nears, police continue to increase pressure on the church and its members. For example, Authorities cut off Christian Xuewei Jia’s power for more than twenty days. He eats cold food and lights up candles to see at night. He goes to his friend’s home to charge his phone, and to a public bathing facility for a shower. Police of Jinniu District Police Station also frequently harassed Chengju Li, another Christian of the ERCC. When police officers visited Ms. Li, they threatened to detain her.

Amidst harassment and being forced to repeatedly move, Elder Li has asked fellow Christians to join him in praying for him and his family.

We pray that we depend on God when we lack, because apart from Him we have no good thing. We pray God makes us put our trust in Him at this difficult time. We pray the Holy Spirit fills us to respond to our situation with gentleness and respect.