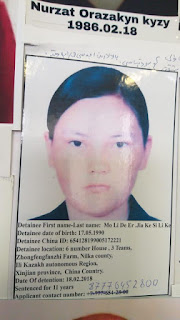 (Ili Kazakh Autonomous Prefecture, Xinjiang—March 10, 2019) A desperate Kazakh father is issuing a plea to the United Nations Human Rights Council and members of Kazakhstan’s government on behalf of his ailing daughter, who has been wrongly imprisoned in China.


Molideer Jiakesileke, a Kazakh Chinese woman from the nation’s northwestern Xinjiang, was arrested on Feb. 18, 2018, when police officers came to her father’s place, inspected it without showing any warrant, and intimidated the man’s wife and sick son. Jiakesileke was taken to the Wulasitai County Police Station and later detained at the Nilka County Police Station.

Her father and his son-in-law applied to visit her multiple times, but all of their requests were rejected. Later, they received news that she would undergo an exam at the local hospital, and they went there to meet her. At around 10:00 a.m., two officers, one male and one female, appeared with Jiakesileke, who had her head covered with a black hood and was shackled by her wrists, ankles, and neck. When her relatives attempted to speak with her, they were not allowed.

Afterward, they applied for permission to visit her in prison multiple times but were barred from doing so. On May 4, just weeks after their ill son passed away from what his father termed an “unbearable mental attack,” they were permitted to visit Jiakesileke and discovered that her health had deteriorated to the point that one of her legs could not function, impeding her ability to walk, and her lungs were ailing as well. Because of her illness, police transferred her from a prison to a so-called “re-education camp,” which is part of a system of concentration camps aimed at imprisoning and torturing ethnic minorities in Xinjiang. She was eventually sent back to the prison and told her father on Nov. 23, 2018, that she had been secretly sentenced to 11 years behind bars, which the family confirmed with Nilka County Court. However, the court has not shown her relatives any official documents.


Since then, they have not heard from her and fear that she might be dead. Currently, they are all under surveillance, and their phones are constantly monitored.

Her father, who wrote a letter describing all of this, is pleading with the United Nations Human Rights Council, Kazakh President Nazarbayev, and Kazakhstan’s Ministry of Foreign Affairs to intervene on behalf of his daughter and secure her freedom.

ChinaAid also backs his call, urging the international community to step in on behalf of this innocent woman and demand her unconditional freedom.