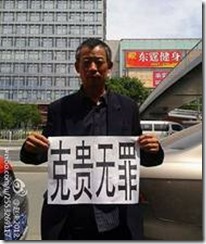 (Linyi, Shandong–April 25, 2013) In apparent retaliation for the testimony of blind legal activist Chen Guangcheng at a Congressional hearing two weeks ago, authorities in his home province of Shandong have exacted fierce retaliation against two of his brothers and a sister-in-law.

The group Chinese Human Rights Defenders has reported that on April 18, when four visitors from Beijing, including artist Xia Xing, were taking videos and photographs around Chen’s home village of Dongshigu, they were beaten up by village Communist Party secretary Chen Guangshan and the head of the Security Joint Defense Force, Liu Changsheng.

This past Sunday (April 21), at about 1 a.m., a hail of stones, bricks and roof tiles rained down on the home of Chen Guangfu, Chen Guangcheng’s eldest brother.  The assault continued for about a half-hour, resulting in damage to his house.  A dead duck and a stack of paper money used as burnt offerings for the dead were placed outside the front gate.  According to local custom, this is meant to be a death threat.  Chen Guangfu has reported the incident to the police, but with no results to date.

ChinaAid has learned that “small character posters” started showing up around the village last Friday (April 19) that were full of insulting attacks on Chen Guangcheng and Chen Guangfu.  On Monday (April 22), 20 saplings that Chen Guangfu had planted were uprooted.  Wednesday (April 24) at 2:31 a.m., Chen Guangfu’s home was again attacked with stones and beer bottles.  Later Wednesday afternoon, Chen Guangfu’s wife, Ren Zongju, was taken to the local police station for questioning, and was allowed to return home at about 4:30 p.m.  She was told that her “harboring a criminal” case had entered the investigation and prosecution stage and that she could hire a lawyer.

The “harboring a criminal” charge is related to the case of her son and Chen’s nephew, Chen Kegui, who was convicted of intentionally injuring a police officer and is serving a three-year, three-month prison term.  He had been acting in self-defense when police staged a pre-dawn raid on his father’s home, where he also lives, in their search for Chen, who had miraculously escaped extra-judicial house arrest and intensive round-the-clock surveillance.

Also on Wednesday, Chen Guangcheng’s younger brother, Chen Guangjun, who was working in Linyi, received a call from the procuratorate’s office, telling him to report to the Yinan County Procuratorate, which he did, but since it was already 6 p.m. when he arrived, the Procutorate was already closed for the day.

The family has also received a phone call from Chen Kegui saying that was ill with appendicitis and asking them to delay their regular visit to the prison.

“These shocking developments are nothing but political retaliation for Chen Guangcheng’s escape to freedom last year,” said ChinaAid founder and president Bob Fu.  “These horrific threats clearly bear the hallmark of the Chinese government that orchestrated the persecution against Chen and his family members over the past seven years.”

“The Chinese government is totally disregarding the high-level U.S.-China diplomatic agreement reached last May before Mr. Chen and his family were allowed to come to the United States.  It is time for President Obama and Secretary Kerry to hold the Chinese top leaders account,” Fu said.

This recent escalation followed Chen’s Congressional testimony two weeks ago, during which he highlighted the fact that the Chinese authorities were violating the promise made to U.S. negotiators that Chen’s extended family would not be harmed once Chen, his wife and their two children had left for the United States.  See the earlier report about the hearing here: https://chinaaid.org/2013/04/blind-legal-activist-chen-guangcheng-to_9.html

Fu, currently in Washington, D.C., spoke Wednesday (April 24) at a Family Research Council event that was broadcast live online about “China’s legal system and freedom of religion–past present and future” in which he described the steadily escalating persecution against Chen Guangcheng’s family and appealed to the international community, democratic governments and the Obama administration to urgently intervene so as to avoid a further deterioration in the situation.  The video of his talk is available here: http://www.frc.org/university/freedom-and-christianity-in-china

Fu and Chen are scheduled to speak on Thursday (April 25) to the American Bar Association’s annual meeting in Washington, D.C. of the Section for International Law. The two will also be meeting with some Congressional leaders.