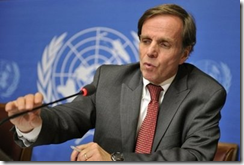 – Fri Apr 22, 1:37 pm ET
BEIJING (AFP) – China and the United States will hold human rights talks in Beijing next week, the State Department announced Friday, amid a Chinese crackdown on government critics that the US condemned.
(AFP/File – US Assistant Secretary for Democracy, Human Rights and Labor Michael Posner, pictured here at the UN …)

Authorities in China have launched their toughest clampdown on dissent in years since anonymous online appeals emerged in February calling for weekly protests to emulate those that have rocked the Arab world.
The State Department said the discussions next week would focus on “human rights developments, including the recent negative trend of forced disappearances, extralegal detentions, and arrests and convictions.”
Assistant Secretary for Democracy, Human Rights and Labor Michael Posner will head an inter-agency delegation to Beijing on April 27-28 for the US-China Human Rights Dialogue, it added in a statement.
The dialogue is held intermittently, depending on the state of relations between China and the United States. It took place last year, in 2008 and before that in 2002.
Scores of Chinese activists and rights lawyers have been rounded up in the past few months since the “Jasmine” campaign emerged, aiming to encourage calls for reform similar to those that sparked unrest in the Arab world.
Prominent artist Ai Weiwei, a staunch critic of China’s ruling Communist Party whose fame had until now given him relative protection, has also been detained and is being investigated for “economic crimes”.
So far, though, no public demonstrations have been reported in China.
But authors led by Salman Rushdie issued a protest Friday after outspoken Chinese writer Liao Yiwu said Beijing had refused him permission to travel to New York for a literary festival.
Liao, who spent four years in jail after writing the poem “Massacre” about the 1989 Tiananmen Square crackdown, was slapped with a ban on leaving China days before he was due to fly out, festival organizers said.
Rushdie, who had invited Liao to take part in the PEN World Voices Festival of International Literature opening Monday, said that he and other writers “emphatically protest this travel ban”.
Separately, rights groups say security forces have used force to put down protests by monks at a Tibetan Buddhist monastery in the southwestern province of Sichuan, triggered when a young monk burnt himself to death last month.
The State Department has repeatedly criticised China’s clampdown and called for the release of detainees, including Ai, and has hit out at the crackdown at the prominent Kirti Monastery.
Chinese police also have moved in to prevent members of the unregistered Shouwang church, a Protestant congregation, from holding public services over the past two weekends.
Church leaders say they are now under house arrest to prevent them holding Easter services Sunday.
China has reacted angrily to the criticism, telling the United States not to interfere and to “stop making irresponsible remarks”.
It also this month released its own assessment of the US human rights record, which lamented the bloodshed of US wars in Iraq and Afghanistan and reports of waterboarding and other harsh treatment of US enemy combatants.
“The United States has turned a blind eye to its own terrible human rights situation and seldom mentions it,” said the report, issued each year to rebut an annual State Department report on human rights around the world that routinely criticises China.
During the talks next week, other rights issues will be discussed including the rule of law, freedom of religion, freedom of expression, labour and minority rights, the State Department said.