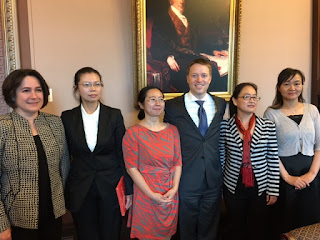 Editor’s note: ChinaAid is deeply concerned with the well-being of Li Ming-Che, who was formally arrested today, and will continue to work alongside his wife, Li Ching-Yu, as we did in D.C. last week. We believe he is innocent and urge China to release him immediately.


(Washington, D.C.—May 26, 2017) In bold steps towards securing freedom in China, members of Congress vowed to take action against the arbitrary imprisonment of human rights lawyers and advocates after a ChinaAid delegation testified to the torture experienced by four such prisoners during a visit to Washington, D.C.

A ChinaAid-led delegation comprised of the organization’s president Bob Fu and Chen Guiqiu, Li Ching-Yu, Wang Yanfang, and Jin Bianling—all wives of imprisoned Chinese human rights activists—traveled to the U.S. capitol to focus on exposing the stories of their husbands’ arrests and accounts of torture. The group toured the Human Rights Watch office and met with its China Director, Sophie Richardson, on May 16. They then spoke with Fred Hiatt, the editorial page editor of the Washington Post and were interviewed by Radio Free Asia.

The next day, Representative Randy Hultgren, Co-Chairman of the Tom Lantos Human Rights Commission, convened with the delegation, as did personnel acting on behalf of Minority Leader Nancy Pelosi, who expressed their deep concern for the women’s husbands. The delegation also met with Secretary of State Rex Tillerson’s assistant Virginia Bennett and Laura Stone, who is from the Bureau of East Asian and Pacific Affairs.

On May 18, Chen, Li, Wang, and Jin shared their stories in front of a hearing of the Subcommittee of Africa, Global Health, Global Human Rights, and International Organizations, a branch of the Foreign Affairs Office. Chen described how authorities arrested her husband, Christian human rights lawyer Xie Yang, and took turns beating him. They subjected him to more than 20 hours of interrogation at once, blew cigarette smoke in his face, starved and dehydrated him, and denied him medical treatment for his illnesses. When these methods failed to get him to confess, his captors threatened to rig a car accident to injure Chen and their children.

When Xie’s lawyer learned of the torture, he decided to publish an account of it, triggering an outpouring of international concern. The story hit international headlines, spotlighted by sources such as the Washington Post, The Wall Street Journal, The New York Times, the American Bar Association, El País, Agencia EFE, The Irish Times, Le Monde, and the Brussels Diplomatic. Because of the attention it received, the police in her hometown of Changsha, Hunan, started summoning Chen for extensive questioning and threatened her.

On May 8, 2017, Xie appeared in court, unaccompanied by the defense lawyers Chen had hired and escorted instead by government-appointed attorneys. He confessed to his alleged crimes, which he previously vowed not to do unless he could not bear the torture or authorities baited him with an opportunity to reunite with his family.

According to Chen’s congressional statement, she was not notified of the court session, and officials seized and detained friends who planned to observe the proceedings.

Xie went free on bail and continues to insist the Communist Party treated him well, even denying his previous allegations of torture. Chen believes this change in opinion comes as a result of the government drugging her husband, a suspicion supported by other human rights lawyers who underwent the same treatment.

Lawyer Jiang Tianyong’s kidnapping occurred on Nov. 21, 2016, during his return from visiting Chen. In his last communication with Jin, Jiang said he purchased a train ticket from Changsha to Beijing. After that, he disappeared and has been denied meetings with lawyers. Additionally, national security agents tail his parents wherever they go.

On May 12, Jin received news that her husband had been tortured, and his legs have swelled, leaving him incapable of walking.

By the time Jiang was taken into police custody, Wang’s husband, Christian human rights lawyer Tang Jingling, had already been in prison for more than a year. On May 16, 2014, officials criminally detained Tang for “picking quarrels and provoking troubles,” and arrested on him June 20 for “inciting subversion of state power.” His mother passed away on Sept. 23 after hearing of his arrest, and authorities ignored Wang and his lawyer’s attempts to bail him out for her funeral, and they withheld information of her death from him until October 2014.

For six months, authorities forbade Tang from meeting with lawyers, and he was banned from contacting the outside world for two years. On Jan. 29, 2016, he was sentenced to five years’ imprisonment.

Since August 2013, Wang has experienced acute emotional distress due to constant government monitoring, but she remains resilient in her advocacy for her husband’s release.

Five months later, Li’s husband, Li Ming-Che was taken into custody March 19, 2017, while crossing the border of Macau and Zhuhai, Guangdong. Supposedly, he was being held in Guangdong.

Before he was detained, Li Ming-Che worked for Wenshan Community College in Taipei and is a human rights advocates.

Shortly after her husband was seized, Li Ching-Yu released a statement demanding to know why her husband was kidnapped. China later confessed that Li Ming-Che was in custody and accused of endangering state security, which he confessed to under coercion.

Today, China formally arrested Li Ming-Che on subversion charges, and it was announced that he is being held in Hunan province. The reason for his transfer is unknown.

On March 31, Li Ching-Yu announced that she refused to hire lawyers for her husband because of her study of the White Terror period, a 38-year political suppression in Taiwan spanning from May 19, 1949-July 15, 1987. Through it, she came to believe that China’s disregard for basic rule of law would render the hiring of any defense useless. She also stated that she planned to travel to Beijing to see her husband.

Afterwards, China dispatched an official to negotiate with her and persuade her to stop releasing statements, keep quiet and cancel her trip, saying they would reward her by releasing her husband. She refused, saying, “Why can’t I accept this kind of guarantee from him? Because I believe: freedom and integrity must be had together. If there’s freedom but no respect, then what difference is there between a man’s life and that of a dog? I don’t want Li Ming-Che to live the same as a dog.”

Via a pre-recorded joint video, Wang Qiaoling and Li Wenzu told the stories of their husbands, who are, respectively, Li Heping and Wang Quanzhang.

“My husband, Li Heping, was secretly tried by the Chinese government on April 28, 2017. He was convicted of ‘subversion of state power’ and was sentenced to three years in prison with a four-year reprieve. He returned home on May 9, 2017, but neither our daughter nor I recognized him. He looked 20 years older and was extremely skinny. He lost over 30 pounds … He suffered from very cruel and sick torture. The most impressive torture he described was that he was forced to take medicine. He never had hypertension, but he was diagnosed with hypertension after he was imprisoned, and he was forced to take hypertension drugs. He had doubted about the medicine and had refused to take it, but the nurse and the guard pressed and held his arms and legs to force him to take it. After taking the medicine, he had muscular pain all over his body. He also felt lethargic. His eyesight decreased a lot. He couldn’t see well. The medication lasted about 22 months. They have changed the medicine and dosage during the process.

“Another torture method he experienced was wearing an H-shaped shackle. Basically, an iron chain connected his handcuffs and fetters. When wearing this kind of shackle, he couldn’t stand straight, and his arms and legs couldn’t stay straight. He was forced this wear it 24 hours a day for about 1 month. He still can’t walk with a straight spine. During the two years he was in prison, he was beaten many times. He was forced to stay close to the cold air from the air conditioner 24 hours a day for several days, which is a very common torture method. He was also forced to remain in one position for more than 10 hours a day. These are the tortures he experienced in the past two years.”

In the other testimony, Li Wenzu says in the nearly two years since her husband, Wang Quanzhang vanished, the only news she received of him came from a recently released human rights lawyer who heard him screaming for help.

“I am deeply concerned about my husband’s safety,” Li Wenzu said. “I don’t know his health condition. I don’t whether he is disabled by the torture. I don’t know whether he is still alive at all, as the authorities are afraid of his lawyer meeting with him and they keep forbidding it. The torture revealed by the released [human rights lawyers] filled me with a lot of dread. I couldn’t eat or sleep due to all kinds of negative speculations.”

On May 19, the delegation met with top White House officials, including Trump’s Special Assistant and the National Security Council’s Senior Director for Asian Affairs Matt Pottinger, the counsel’s Director of China Affairs Leah Brady, and two of their colleagues. Pottinger, who spent eight years as a journalist and one year in Taiwan studying Chinese, suffered from the pressure to confess to supposed crimes when China’s Communist Party detained him for covering the murder of farmers to reclaim their land. He counseled Li Ching-Yu and Chen to forgive their husbands for confessing to their guilt and then assist them in forgiving themselves.

During this meeting, ChinaAid confirmed that Trump signed off on a decision to rescue Chen.