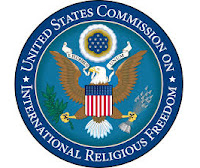 
The United States Commission on International Religious Freedom (USCIRF) released its 2015 Annual Report on Thursday, in which it recommended that the Secretary of State re-designate China, along with eight other countries, as a country of particular concern (CPC). The report stated that “unprecedented violations” against religious groups were a result of the Chinese government’s strategy to further its control.

“People of faith continue to face arrests, fines, denials of justice, lengthy prison sentences, and in some cases, the closing or bulldozing of places of worship. Based on the alarming increase in systematic, egregious, and ongoing abuses, USCIRF again recommends China be designated a “country of particular concern,” or CPC, under the International Religious Freedom Act (IRFA). The State Department has designated China as a CPC since 1999, most recently in July 2014,” the report said. The report covered several religions, as seen in a selection below. The full report can be viewed on USCIRF’s website.

Uighur Muslims
On May 25, 2014, … Chinese President Xi Jinping announced a campaign against terrorism in Xinjiang that has led to a wide-scale crackdown on religious expression. Hundreds or thousands of Uighur Muslims have been detained in security sweeps, and many prosecuted on charges of “endangering state security,” which potentially carry the death penalty. Local authorities’ efforts to suppress so-called “religious extremism” also have resulted in Uighur Muslims being detained and sentenced to jail for religious attire, unofficial publications of Islamic teachings, religious gatherings, and religious activities.

Tibetan Buddhists
Since 2008, the Chinese government has imposed harsh policies of repression on Buddhists across the Tibetan plateau, including harassment, imprisonment, and torture. … The government’s campaign of repression also has involved the destruction of religious structures and restrictions that have forced younger monks out of monasteries. Self-immolations have continued, and in recent years more than 130 Tibetan Buddhists, including monks and nuns, have set themselves on fire in acts of protest. Moreover, the Chinese government continued its ongoing vilification of the Dalai Lama, including accusing him of seeking Tibetan independence, which he has repeatedly denied. While there were indications the Chinese government may allow him to visit Tibet, its insistence on selecting the next Dalai Lama continued to strain the relationship.

Protestants and Catholics
In a striking development, at least 400 churches were torn down or had crosses forcibly removed and/or demolished in 2014, a notable increase over previous years. Most of these incidents occurred in Zhejiang Province and included both underground and state-sanctioned churches, though incidents were reported in other places as well. In Zhejiang Province, these actions can be attributed to the “Three Rectifications and One Demolition” campaign, the provincial government’s March 2013 plan purportedly aimed at building code violations and illegal structures. Many religious believers in Zhejiang, particularly Christians, regarded the campaign as directly targeting their religion. …

Pope Francis has opened the door for improved relations with China, reportedly inviting President Xi Jinping to the Vatican. Additionally, the Chinese government granted the Pope permission to fly through Chinese airspace following his January 2015 trip to the Philippines. … However, shortly thereafter, a Chinese Foreign Ministry spokesperson reiterated calls for the Vatican to cut ties with Taiwan and to stop interfering in China’s internal affairs in the name of religion. Moreover, according to a 2015 working plan of the State Administration of Religious Affairs, China still insists on electing and ordaining bishops completely independent of the Holy See.

Falun Gong
Falun Gong The year 2014 marked the 15th anniversary of the Chinese government’s ban on Falun Gong, a practice officials consider to be an “evil cult.” In fact, Falun Gong heads the expanded list of cults the government issued in 2014. Since the ban, Falun Gong practitioners have been imprisoned and subjected to torture, such as psychiatric experiments and organ harvesting from executed prisoners. … While China in 2014 reportedly ended its deplorable system of “re-education through labor,” a form of extrajudicial detention used for many Falun Gong practitioners, other forms of extralegal detention remain, including secretive “black jails.”

Targeting of Cults
Under Article 300 of China’s Criminal Law, those who participate in so-called “superstitious sects or secret societies or weird religious organizations” or other similar activity are subject to imprisonment. In 2014, the Chinese government took its broadest steps yet to designate and criminalize some groups as ‘‘cult organizations.” … As part of the “anti-cult” effort, China’s government issued a directive to “eradicate” unregistered churches over the course of the next decade, resulting in unregistered church members facing an increased number of arrests, fines, and church closures in 2014.