ChinaAid Association
(Midland, Texas – Nov. 30, 2010) News reports from the official Chinese media and from overseas accounts about a recent Catholic bishop’s ordination highlighted the long-standing dispute over who has authority over the Catholic church in China.
On Nov. 20, Fr Joseph Guo Jincai was ordained bishop of Chengde, in Hebei province, the first time since 2006 that the Chinese authorities had ordained a bishop without papal consent.
A report in the official Chinese Chengde Daily made no mention of the Vatican or of Beijing’s decades-long dispute with Rome, whose authority over the Catholic church on mainland China is not recognized by the Beijing regime. 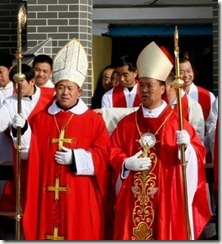 The Chengde Daily report said the ordination “was carried out at the Pingquan prefecture Catholic church in grand and solemn fashion.” It made no mention of security personnel, including plainclothes police, that the international general news wire service Associated Press and the Italian religious news wire service AsiaNews said had been deployed. The AP said dozens of police blocked the church building and barred reporters from entering. (Photo by Chengde Daily: The newly ordained bishop on the right)
Instead, the Chengde Daily report said that “the entire ceremony was carried out in a grand and solemn, warm, stately and harmonious atmosphere.” It said nearly 600 people were in attendance, including bishops from eight other dioceses around China. It did not mention, as was reported by both the AP and AsiaNews, as well as other international news media, that several of the bishops were forced to attend and had been detained by government authorities several days prior to the ceremony to ensure their participation.
In a comically whitewashed version of history that comprised most of the remainder of the brief, eight-sentence Chengde Daily report, it said the European-style church building had been constructed in 1892 and that in “1948, when the Nationalist army and government retreated in defeat from Pingquan, the Catholic church’s priests and nuns all left with the Nationalists.”
The newspaper’s very next sentence leapfrogged over four decades of brutal Communist suppression of religious activity off any kind in China and said simply, “In 1987, the prefecture government allocated special funds to renovate the church, and in 1989 the work was completed and a dedication ceremony for the church was held.”
The newspaper’s account completely ignored the fact that after the Communist Party took power in 1949, it set up an independent government authority over the mainland Catholic church called the Chinese Catholic Patriotic Association and forced Chinese Catholics to cut ties with Rome and worship only in government-approved churches.
However, millions of Chinese Catholics – estimated by scholars and observers to be as many as 60 million, or three times the size of the official Chinese church – remain loyal to the Vatican and worship in underground congregations in communion with the Holy See. Under Pope Benedict XVI, relations in recent years have improved and diputes over appointments were avoided under a tacit agreement in which the state church would retain the power to name bishops as long as the names are first submitted to the Vatican for review and approval. This time, however, the Chinese authorities proceeded with plans to ordain Guo over the Vatican’s objections, putting him at risk of excommunication, another fact that was missing from the Chengde Daily report.
The Vatican on Nov. 24 expressed deep regret over the ordination, saying in a press statement that “because the above-mentioned episcopal ordination was conferred without the apostolic mandate and, therefore, (it) constitutes a painful wound upon ecclesial communion and a grave violation of Catholic discipline  (cf. Letter of Benedict XVI to the Church in China, 2007, n. 9).” Read more here
ChinaAid Association president and founder Pastor Bob Fu said, “We strongly criticize the illegitimate ordination, which violates both the Vatican’s ritual law and the conscience and freedom of Chinese Catholic believers, as well as their loyalty to the Pope.”
To read more about the dispute over the bishop’s ordination, see:
http://www.asianews.it/news-en/Chengde,-eight-bishops-in-communion-with-Pope-participate-in-illicit-ordination-20044.html
http://www.asianews.it/news-en/Chengde:-illicit-Episcopal-ordination,-the-first-in-four-years-20038.html
http://www.kentucky.com/2010/11/24/1538577/vatican-denounces-china-for-bishop.html
http://www.kentucky.com/2010/11/20/1533221/china-church-ordains-bishop-over.html#storylink=mirelated
http://www.kentucky.com/2010/11/19/1531646/chinas-catholic-church-says-it.html#storylink=mirelated
ChinaAid was founded in 2002 to draw international attention to China’s gross human rights violations against house church Christians.
The organization, based in Midland, Texas, monitors and reports on religious freedom in China, particularly focusing on the fate of believers who belong to banned or unofficial house churches, which have 60 to 80 million members. ChinaAid issues frequent news releases on cases of religious persecution involving Protestant house church congregations, assists victims to assert their right to freedom of conscience and freedom of religious practice in China, and works to promote the rule of law in China.
ChinaAid has become widely recognized as a reliable source of up-to-date information about religious persecution and the overall human rights situation in China. ChinaAid founder and president Pastor Bob Fu has testified before many organizations, including the European Parliament, the U.S. House of Representative’s International Relations Committee, the U.S. Commission on International Religious Freedom, the Congressional-Executive Commission on China and the U.N. Commission on Human Rights.