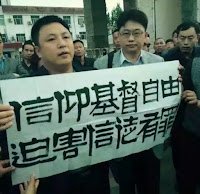 UPDATED at 9:04 a.m., May 28, 2015: Zhao Weiliang and Cheng Hongpeng were sentenced to four and three years in prison, respectively, for “utilizing a cult to obstruct justice.”

The defendants, Zhao Weiliang and Cheng Hongpeng, were detained on June 25, 2014, when 22 Christians gathered to practice hymns for their church. When their trial began on April 22, the judge declared that the verdict would be announced at a later time.

Another of the choir practice’s attendees, Wang Aimei, who lives in a neighboring county has also been in detention since the initial incident. Her verdict, declaring that she is exempt from criminal penalty, was announced on May 22.

China Aid provides legal aid in cases like this to ensure innocent Christians aren’t penalized for practicing their religion and to encourage lawyers, who typically use their own funds to defend these cases, to take a stand against wrongful persecution against Chinese citizens’ right to religious freedom. Please join China Aid in supporting human rights defense lawyers by making a gift here.