Vicious Persecution of Churches in Heilongjiang and Shandong, Presbyterian Federation of Beijing Calls for Prayers (photo)

Presbyterian Federation of Beijing has made an urgent appeal for prayers for the persecuted church in Heilongjiang and for assistance in hiring lawyers to intervene according to law. Prominent Christian Lawyer Li Fangping has agreed to represent the church in this case.

At about 7 p.m. on February 19, two police officers from Youhao District of Yichun City of Heilongjiang suddenly broke into Youhao Church (photo on the above). Under the guise of fire-code compliance inspection, they viciously harassed the members who were serving at the church. The chief pastor of the church, Sister Sun Wenxian, said that the officers didn’t give any acceptable reasons for their action. Further, one of the officers had a strong smell of liquor and was in a drunken state.

Pastor Sun Wenxian denounced them to their face for their unreasonable conduct and demanded that they show their identification papers. For this, the two police officers became furious and called her bad names and threatened to seal off Youhao Church. In addition, they became physically violent and beat her. In the physical conflict Pastor Sun Wenxian was injured so severely, both mentally and physically, that she had a heart attack.

Sister Hao, who serves in the church, told us that during this time they phoned #110 for police several times but none came. However, in comparison, these two police officers called, and within five minutes a large group of agents from Domestic Security Protection Squad (DSPS) of the Public Security Bureau entered the courtyard of Youhao Church. Sister Hao said that only when they saw Pastor Sun Wenxian was having a heart attack, they didn’t dare to do whatever they had intended. 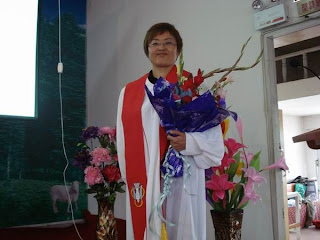 At this time, DSPS agents of Youhao District Public Security Bureau are assigned to stay at the hospital 24 hours a day. Pastor Sun Wenxian said: “In name, they are taking care of me. In fact, they are placing me under house arrest for fear that I would petition higher authorities and sue them.”

The following is an urgent letter for prayer from Presbyterian Federation of Beijing:

An urgent prayer from Presbyterian Federation of Beijing and matters concerning legal assistance.
Presbyterian Federation of Beijing proposes an urgent prayer among Christian churches for the injured Pastor Sun Wenxian of Youhao District in Yichun City, Heilongjiang Province. We express our serious concerns for the injury suffered by Pastor Sun at the hands of local police. We strongly denounce the perpetrators causing the incident and demand that relevant authorities investigate the truth behind the incident; we hold the perpetrators responsible for their conduct and ask that they take measures to guarantee similar things do not happen again and that they ensure citizens’ rights to freedom of religion are not violated!

Presbyterian Federation of Beijing will hire a lawyer who will go to Youhao Church of Yichun City, Heilongjiang Province to provide the related legal assistance!

We ask the Lord to bless and lead Youhao Church of Yichun City, Heilongjiang Province and Pastor Sun Wenxian; we thank Him that He is with us and gives us peace and joy in Christ!

In another development, according to ChinaAid, at about 2 o’clock on the afternoon of February 20, the Missionary Meeting of the West held by a house church in Jimo, Shandong Province, was raided by the local police and departments in charge of religious affairs. It is learned that two missionaries respectively from America and South Korea were detained. Besides, over 90 members of a fellowship of college students and house church missionaries were booked by their IDs and were then dispersed by force.

ChinaAid strongly denounces the evil conduct of the police in Youhao District, Yichun City, Heilongjiang in raiding the church, insulting the believers, and beating the pastor, and it also strongly denounces the raiding of the missionary meeting at the house church in Jimo City, Shandong Province and the detention of the missionaries there. We hope the local government will abide by the Constitutional guarantee of freedom of religion and investigate the liability of the relevant persons involved in this incident. We also hope they will make a genuine effort to build and maintain harmony between the church and the state. We call on various churches, both in China and abroad, to pray for Youhao Church in its dilemma, for the members of the church, and for Pastor Sun Wenxian for her healing from such brutal treatment. We implore God to give us consolation, treatment, blessings, protection, and encouragement.