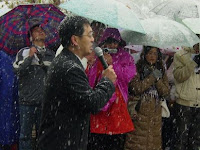 A visit to Pastor Jin Tianming

The cab stopped at the gate of the residential compound .  When I saw the window of Pastor Tianming’s house, tears couldn’t help flowing from my eyes.  When I last came here with my mother who was seriously sick and with a few big pieces of luggage, Tianming had been waiting downstairs for a long time with a smiling face.  Today, it’s hard to recall all these past episodes of our life.  Tianming has been placed under house arrest for over 10 weeks now and I didn’t know how his health was and how his mood was.  Thinking of this, sadness overwhelmed me and tears ran down my face.