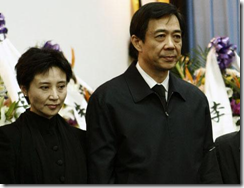 Chinese state media are painting former Communist Party leader Bo Xilai as a fallen star, tainted by corruption and an allegedly murderous wife. But in Chongqing, the southwestern megalopolis he governed, the politician was often admired for overseeing impressive economic growth and city improvement projects.

Photo: REUTERS   Former China’s Chonging Municipality Communist Party Secretary Bo Xilai (r) and his wife Gu Kailai (file photo)
The swift removal of Bo from his post, and his wife’s arrest for the alleged murder of a British citizen, have shocked many residents of Chongqing.

“The mood here is bafflement and surprise. The average people on the street tend to love him. People can’t stop talking about all the things they’ve done for the city. He’s made the streets safer. He’s made it better looking,” says VOA’s Stephanie Ho, reporting from Chongqing.

“People in public housing had met him when he toured the complex, and they were still in awe of him because they felt like he connected with them,” says Ho, adding that Bo is unusual in China for a charisma more often seen in Western leaders like former U.S. President Bill Clinton.

Despite the respect for Bo’s development projects, Ho says there is still widespread trust in the Central government’s decision. She reports that many people believe there must be a bigger political battle being fought behind the scenes.

Communist Party Central Committee officials have not detailed what violations Bo may have committed, saying only that he was suspected of involvement in “serious [party] discipline violations.”

The state-run China Daily newspaper on Thursday hinted at the charges to come, quoting Liu Lin, the deputy head of the Henan Provincial Corruption Prevention Bureau, as saying Bo’s investigation demonstrates the party’s “resolution and confidence in fighting corruption.”

His alleged graft would not be unusual in China, where officials smuggled about $127 billion out of the country in the two decades leading up to 2008, according to a report released last year by the Central Bank’s anti-money laundering bureau.

While allegations of corruption may be met with a shrug by Chinese citizens, murder is still a big deal.

Stephanie Ho says the homicide investigation of Bo’s wife Gu Kailai came at an opportune time for the Central government as it moves to distance Bo from its key leadership body ahead of a Party Congress meeting that will choose the country’s next generation of leaders.

Kailai, and an orderly in the Bo household, are being held by judicial authorities for suspicion in the November death of Neil Heywood, a British businessman with close ties to Bo’s family.

“For the central government to have this murder scandal come up if it is indeed true, is amazingly opportune, because that’s something that people can understand is bad,” says Ho. “Murder is bad. Whereas corruption is bad but everybody is corrupt here in the leadership. You can’t get to the top leadership without being somewhat corrupt.”

Kate Woodsome contributed to this report.