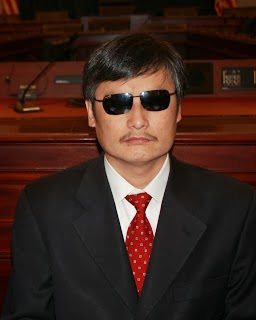 Washington D.C.— Pastor [“Bob”] Fu Xiqiu , president of the U.S.-based Christian organization China Aid Association, told the Voice of America on the morning of Sept. 30 Eastern Standard Time that an agent from the FBI’s office in El Paso, Texas told him that they did not find any suspicious software in the cell phone or the tablet computer that was given to blind Chinese rights defender Chen Guangcheng after he arrived in the United States in May of last year. Pastor Fu said, the news that New York University professor Jerome Cohen broke to the media at that time about the alleged spyware was [a case of] “making something out of nothing” and were “lies” and “slander” [based on] “fabricated facts.” There has been no response so far from Professor Jerome Cohen or NYU, and the VOA will continue trying to get in touch with them.

ChinaAid, the Texas-based Christian rights defense organization headed by Bob Fu, immediately issued a statement denying the allegation and saying it had already reported the case to the FBI, requesting an investigation of the case.

In his interview with VOA, Bob Fu said that the conclusion of FBI’s investigation was that it found no trace of spyware having been installed in the above-mentioned cell phone and tablet computer.

He said: “The FBI investigator told me and Guangcheng that they conducted a very detailed investigation [with] what could be said to be the FBI’s best technology. Their conclusion was that there was no trace of spyware now or of spyware having previously been installed. That is to say, no such thing ever happened. Therefore, the accusation by NYU and Professor Jerome Cohen was totally [a case of] making something out of nothing, was a lie and a made-up fact. No such thing ever happened, so to us, this was slander.”

Reuters reported on June 21 that NYU professor Jerome Cohen said that last May, when Chen Guangcheng had just arrived in the United States, his friend and supporter Pastor Bob Fu gave him a cell phone and a tablet computer to use that had tracking and surveillance spyware installed in it.

The report said that Jerome Cohen pointed out the person who gave the gift should have been helping Chen Guangcheng, but instead, he gave Chen Guangcheng a “Trojan horse” to be used to secretly monitor Chen Guangcheng’s whereabouts.

The New York Times in its June 21 report said NYU spokesman John H. Beckman confirmed the basic circumstances of this incident but provided no further information.

On Sept. 30, Bob Fu told VOA that he and his organization were considering what actions to take in response to this. He also urged Professor Jerome Cohen and NYU to apologize for the lie and the slander about the spyware, admit they were wrong and correct it.

He said: “They have already caused great damage to us internationally, to me personally, to my family and the entire ChinaAid organization. Our reputation has also been greatly damaged. I think they should bear the moral and legal responsibility [for this]. Of course, we reserve [the right] to hold them liable. For now, however, what we ask is that they at least apologize, publicly apologize for this lie, for fabricating this lie. This is the least they can do.”

Bob Fu told VOA that placing a person under surveillance constitutes a crime. If NYU found the so-called tracking and monitoring software over a year ago, why didn’t they immediately report it to the police? He also pointed out that in the past year or so, he and Professor Jerome Cohen were in touch and talked many times, so why did this only come up in June of this year? Bob Fu disclosed that he recently saw Professor Cohen at a conference at the University of Pennsylvania in Philadelphia, and asked him about this matter, but Cohen did not apologize.

Bob Fu also said that a Reuters reporter revealed in a phone conversation that a cell phone given to Chen Guangcheng over a year ago by Ms. Chai Ling, the June 4 student leader now doing charity work in the United States, reportedly was also found by NYU personnel to contain a spyware. However, neither Professor Jerome Cohen nor NYU have been able to provide any evidence [to back up] their accusation that the two cell phones and the tablet computer given to Chen Guangcheng had the so-called spyware.

He said: “No one has provided any evidence. Besides, according to the Reuter’s reporter, NYU refuses to let its technicians come out to discuss the specifics of this matter [or] to give any proof because Professor Cohen was the one who first told reporters.

Bob Fu thinks that in bringing up the claim of the spyware, NYU clearly intended to divert the attention of public opinion away from his assertion that the sch
ool had caved in to pressure from the Chinese Communists and kicked out the human rights activist Chen Guangcheng. NYU did not give a clear account [in response to the assertion]. This past June, Bob Fu disclosed to VOA that Chen Guangcheng was being subjected to steadily increasing punishment for refusing to accept the school’s restrictions on his freedom of speech and political activities. Last November, after less than a half-year of study at NYU, the school cut off Chen Guangcheng’s stipend for living expenses. This [development] was related to Chen’s meetings with bipartisan leaders of the Congress in Washington D.C. in late October and his open criticism of China’s human rights situation and its dictatorship.

This head of a Christian rights defense group said that last May, after Chen Guangcheng’s family came to live on the NYU campus, a woman employee who was then involved in the planning for the establishment of a branch school in Shanghai was quickly transferred to assist Chen Guangcheng. Bob Fu pointed out that Chen Guangcheng’s trip to Washington D.C. to meet with Congressmen took place in the context of NYU’s reluctant agreement and displeasure, and that the woman accompanying Chen to Congress, who told the outside world that she was Chen’s advisor, said to Chen Guangcheng, who had again openly criticized China’s human rights record and who been interviewed by Radio Free Asia, that he must not be out of her sight, which made Chen Guangcheng consider staging a sit-in at Washington’s Union Station.

Earlier this year, Chen Guangcheng issued a written statement through a law firm confirming the rumor that NYU had asked him to leave the school and criticizing some American academic institutions and universities for caving in to pressure from Beijing. Chen Guangcheng has not made any further public commentary about this matter, but he privately told friends that when the time is right, he will make public to society in general the relevant evidence he has obtained.

After the news broke that NYU had given Chen Guangcheng a deadline to leave the school, it insisted that Chen Guangcheng’s visiting scholar status was only for a year and expressed disappointment that Chen Guangcheng alleged the school had caved in to pressure from Beijing. At the time, Professor Jerome Cohen, via the media, said [to] this special student for whom arrangements were made to be a visiting scholar at NYU’s School of Law after he escaped from house arrest in his native town of Dongshigu: “You shouldn’t bite the hand that feeds you.”