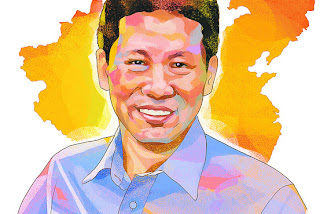 How the son of a beggar became a democrat, a Christian and a guide to the recently escaped dissident Chen Guangcheng.

A fishing village in southern China revolts against corrupt Communist Party rule and holds democratic elections. A top Chinese leader is deposed and whisked to an undisclosed location after his wife is accused of murdering a British expatriate, exposing fissures among China’s top autocrats. Thousands of protests, the vast majority unreported in the West, erupt daily. A blind Chinese human-rights lawyer escapes after years of house arrest, treks 20 hours, injures his foot, but finds his way to the U.S. Embassy and, eventually, to New York. (Picture: Zina Saunders)

The news out of China these days is gripping, and there’s no one more qualified to read the tea leaves than Bob Fu—who from a town in West Texas coordinates the most influential network of human-rights activists, underground Christians and freedom fighters in China. Since 2004, Midland (pop. 111,147) has been home to the spunky 44-year-old pastor and his nonprofit, ChinaAid. It’s here that Mr. Fu and his staff of five use the Internet, telephone, letters—any means possible, though he’s reticent to give specifics—to communicate with thousands of volunteers who promote religious freedom and the rule of law in China.

Why Midland? “It’s much safer here,” Mr. Fu chuckles. After immigrating to the U.S. in 1997, he and his family settled in Philadelphia, where they were soon tailed by Chinese agents. Other agents “confronted” him in Washington, D.C., and invited him for tea. “The invitation for tea in China to dissidents means soft interrogation,” Mr. Fu explains. When a Midland-based minister invited Mr. Fu and his wife to visit, they liked the place so much that they stayed.

ChinaAid provides support for underground house churches, legal counsel for victims of forced abortions, financial help to prisoners in labor camps and their families, and more. It also sponsors the only nationally circulated underground church magazine in China. ChinaAid’s three-pronged strategy, Mr. Fu says, consists of “exposing the abuses, encouraging the abused, and spiritually and legally equipping” the Chinese “to defend their faith and freedom.”

Mr. Fu often serves as a liaison between China’s oppressed and the forces of government or media who can help them. After Falun Gong and underground church members spirited the wife of human-rights lawyer Gao Zhisheng and her two children to Bangkok in early 2009, Mr. Fu contacted the National Security Council and the State Department in the final hours of the Bush administration to help the family obtain asylum. Mr. Fu then traveled to Bangkok, and less than two weeks later the family was safely settled in the United States.

Now Mr. Fu is “overwhelmed by all these reports coming to us,” waving a thick stack of messages to demonstrate the workload. It is dangerous advocacy. “Of course the government [agents] on the ground try to capture our people who feed the information,” he says. “Some are even sentenced to [prison] for [what] they call ‘leaking intelligence to overseas organizations.’ One photo showing a church was destroyed could mean a three-year sentence. So we are very careful.”

Mr. Fu is adamant that Christianity is changing China for the better. “In 1949, according to the official figures, there were about 870,000 Christians in China,” he says. “But today, even the conservative number by the government academic survey . . . has risen to 60 million.” Mr. Fu thinks the true figure may be 80 million to 100 million. That’s not a lot in a country of 1.3 billion, but it’s growing fast. Christians “fill the gap” in civil society. “They were the first group driving the tractors and buses after the earthquake in Sichuan [in 2008]. They were the majority of the volunteers.”

ChinaAid evaluates each request before deciding whether to go public. It publicizes 40% to 50% of them, preferring in other cases to work behind the scenes. “If those arrested unjustly are released after diplomatic pressure, we wouldn’t even report” it, says Mr. Fu. “Sometimes, it’s a little funny . . . I was on the phone negotiating with a director of the public security bureau in Xinjiang or Tibet or Gansu province, because usually I was the first one to get the information.”

Mr. Fu recounts one harrowing episode in 2007, when an underground pastor in Guangxi province called him, distraught that his wife, who was seven months pregnant, had been dragged to the hospital by 10 officials to be forced to have an abortion. Some 80 other women in the hospital were awaiting the same fate within the next 48 hours. “I called NPR and other reporters,” Mr. Fu says, but by the time the reporter got there “two doses of poison drug were already induced into her stomach and the baby was aborted. So I was on the phone with the pastor, and they were crying.”

Last December, he says, ChinaAid identified a leader of a house church in Tibet who was “managing an orphanage with 30 orphans. They’re deserted on the street and there’s no government system to take care of them. It was the Christians who brought them into their homes, fed them and gave them education. Then the government arrested them, and forced this leader to put [the children] on the street. He said we would rather [see] them on the street than being taken care of by the Christians.”
Mr. Fu has been begging Obama administration officials to publicly take up the cause of Chinese dissidents since they first entered office. They’ve generally demurred. Former President George W. Bush met Mr. Fu’s delegation of “top Chinese human-rights lawyers” three times, but President Obama has refused. In 2011, ChinaAid’s request for a White House meeting was “totally ignored,” Mr. Fu says.

Mr. Fu is also critical of how the U.S. handled Chen Guangcheng’s ordeal when it reached crisis point last month. The blind lawyer made his way to Beijing with no guarantee the U.S. Embassy would shelter him. When diplomats did give him protection, they at first refused to convey to Mr. Chen information Mr. Fu had supplied to the U.S. State Department that Mr. Chen’s family was being mistreated by Chinese authorities. Later they opened up a “24-hour phone line” for Mr. Fu.

Meanwhile, Communist Party thugs held Mr. Chen’s wife in custody and forced her to call her husband and ask him to leave the embassy, which he did. “It was basically persuasion by force,” says Mr. Fu. “Why didn’t the U.S. side negotiate with China by asking his wife to come to the embassy, so that they can have a safe environment to talk about their plan?”

After a great deal of international pressure—including two congressional hearings at which cellphone calls allowed Mr. Fu to translate Mr. Chen’s testimony in real time—the U.S. granted the dissident a student visa to study at New York University. His immediate family accompanied him.

The episode sent “a very chilling message to the Chinese freedom fighters,” Mr. Fu says, suggesting that in the future “if those who are persecuted seek this kind of U.S. help, we’ll shut the door.” The Chinese government, he says, also got the message and is “increasingly scrutinizing other high-profile rights defenders.” Some, like Nobel Peace Prize winner Liu Xiaobo and Mr. Gao, have been in Chinese jails for years. Mr. Fu intends to launch another campaign for Mr. Gao’s freedom soon.

Mr. Fu has a personal understanding of the average Chinese plight, which he thinks the Western media ignore when they focus on elites. He was born the son of a beggar mother and a disabled father in Shandong province (“the same province as Chen”). He nonetheless went to college at Liaocheng University and started the process of joining the Communist Party because “in China, in order to be treated equal, the best solution is to become a ‘big potato’—you know, to become a government official.”

Then in 1989, protests for democracy broke out. Mr. Fu organized a group of students to “occupy [a] corner of Tiananmen Square with our school flag,” but he left a few days before the June 4 Tiananmen Square massacre because his then-girlfriend—now wife—fell ill.

Back in Shandong, Mr. Fu was investigated by the public security bureau, forced to write confessions, and “treated like a criminal, but not [put] in a jail.” His fellow students turned on him, as did the university president. “I thought by joining the Communist Party, reforming the party, we can build a better future for my family in a small sense, and for a better China. But how can the People’s Army start shooting its own people?” He never became a party member.

An American English teacher gave Mr. Fu the biography of a Chinese intellectual, Xi Shengmo, who converted to Christianity and did good works. “That book changed my life,” Mr. Fu says. He went on to teach English at the Communist Party school in Beijing (“God’s humor”), all the while “engaging the house church movement” and trying to “get different groups together.” Mr. Fu and his wife established an independent Bible school in a Beijing suburb—using chairs from the Communist Party school. They were caught and jailed for two months. Later they escaped to Thailand in 1996, Hong Kong, and then the United States.

China is going to change, whether the regime wants it to or not, says Mr. Fu. “More than two-thirds” of party elites have “close relatives or a spouse” in the U.S. or the West, he says. “What kind of confidence do they have?” He sees government weakness in the Chen episode: “Why [are they] so afraid for Chen—for a blind man to speak up? If they’re doing things right, why are they afraid? Why do they have to put Gao Zhisheng in the Gobi desert, to even try to prevent anybody from visiting him?”
Mr. Fu sees the U.S. role in promoting human rights in China as “a matter of principle for this nation, whether we want to betray our core values in exchange for temporary benefit.” International pressure on China works because “they really want to be taken seriously.”

The issue should be in “all the bilateral dialogue and relations,” he says. “How much [does] Timothy Geithner talk about human rights, at all, or labor rights? . . . If Bill Gates visits China, talk about Gao Zhisheng. What kind of effect [would this have]? I think Gao would be released very much faster! Very soon!”

Ms. Kissel is a member of the Journal’s editorial board.