Washington Post: How a 16-year-old found himself caught up in China’s latest crackdown

The Washington Post
By Emily Rauhala October 13 at 8:35 AM

He is not a lawyer, or a dissident. He is a 16-year-old with a bowl-cut fringe.

But Bao Zhuoxuan—a child—finds himself caught up in China’s latest rights crackdown, collateral damage, it seems, in the government’s pursuit of his parents, the human rights lawyer Wang Yu, and Bao Longjun, his activist dad.

Bao Zhuoxuan was apprehended last week in Mong La, Myanmar, where hefled, hoping to make his way to Thailand, and ultimately to high school in the United States, according to two family friends, Liang Bo and Zhou Fengsuo.

Rights groups believe he is now in Inner Mongolia, likely under close surveillance. Reached by phone, local police said they have no knowledge of Bao’s case.


The boy’s attempt to flee China and his still-mysterious return to Chinese soil—who sent him back and how?—are just the latest twists in a months long ordeal that underlines the risks facing the children and other family members of Chinese activists.

Some, like Jewher Ilham, daughter of Ilham Tohti, a jailed Uighur scholar, and Ti-Anna Wang, the daughter of Wang Bingzhang, a pro-democracy activist, live in exile, campaigning from afar.

Others can’t get out, and may face years of living under surveillance, their communication and movements monitored and controlled. Bao’s case stands out because he is so young—still a high school student—and because he was apprehended abroad, while trying, desperately, to escape.

Bao’s troubles began in July, when his mother, Wang Yu, a lawyer who has represented Tohti and one of five Chinese feminists jailed this spring, disappeared along with more than 200 lawyers , legal aides, and activists. 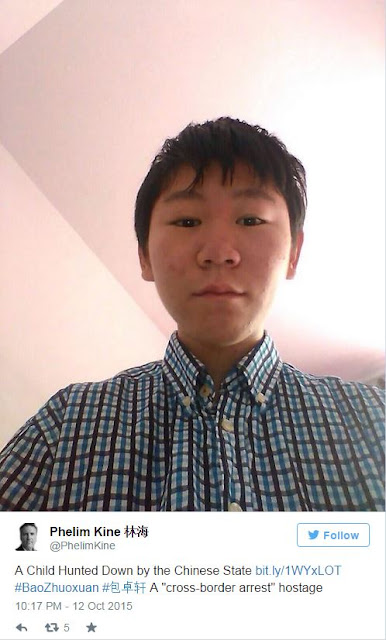 Around the same time, Bao and his father were about to board a flight to Australia, where the teenager was set to attend classes a Melbourne’s Strathmore Secondary College, when they were dragged from the security line, separated, and put into vans, according to account in the Sydney Morning Herald.

“I was happily preparing to go to Australia to start my studies,” the younger Bao told the paper in August. “For something like this to happen, it’s like falling to hell from heaven.”

Neither his mother nor his father have been seen since then. Bao, meanwhile was taken to a hotel in Tianjin and then to Inner Mongolia, where he was told he could not leave China, according to family friend Liang Bo. His passport was confiscated, rights groups say.

In an interview with Hong Kong’s Stand News published on Aug. 11, Bao said local officials told him he was not allowed to hire a lawyer, contact his parents’ friends or foreign groups, or to study overseas.

When he objected, he said, he was told the measures were “for his own good.” Asked how he was doing, he reportedly said, “I’m suffering, but not afraid.”

At some more recent point—details of his journey to Myanmar are still spotty—Bao made it to Mong Le, where he was apprehended alongside two Chinese nationals at a guest house and led away by uniformed police.

From there, he appears to have been sent back to China, where he is now believed to be with his grandparents in Inner Mongolia, under house arrest.

More than 80 human rights lawyers have signed a petition denouncing “extralegal and inhumane treatment” of a minor.

When Philip Wen, China correspondent for the Sydney Morning Herald, tried to reach Bao in the Inner Mongolian city of Ulanhot on Tuesday, he was stopped by police and subjected to a “lengthy questioning,” Wen said in a tweet.

Then he, like Bao, was bundled up and shipped away.

With reporting from Liu Liu.