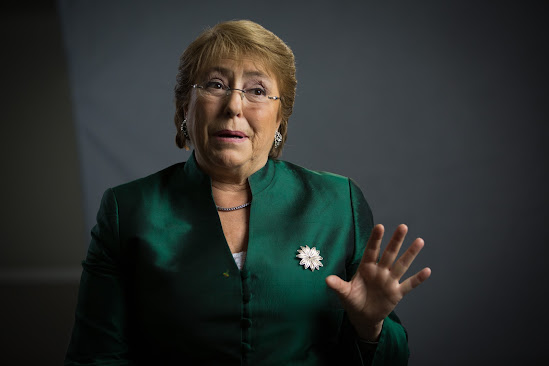 (The Washington Stand—June 2, 2022) The following is a commentary piece responding to Michelle Bachelet’s trip to China. The United Nations High Commissioner for Human Rights (UNHCHR) did not thoroughly investigate the Xinjiang concentration camps nor provide a statement condemning China’s crimes against humanity. The piece quotes ChinaAid Founder and President Bob Fu as it criticizes UNHCHR’s visit.

The United Nations High Commissioner for Human Rights wrapped up her controversial visit to China last week by presenting a livestreamed statement to the press. While someone who advocates for human rights should have much to discuss about the situation in China, Michelle Bachelet kept her comments short — and echoed Chinese Communist Party (CCP) talking points.

To the disappointment of human rights advocates, Bachelet proceeded to use the CCP’s preferred terminology throughout her statement. She described the detainment of more than a million Uyghur people as “deradicalization” and “anti-terrorism” efforts, accepting Beijing’s widely discredited excuse for its actions in the Xinjiang region. Bachelet proceeded to praise China’s universal health care and near-universal unemployment insurance and expressed her desire for her office to cooperate and meet more often with Chinese leaders.

Bachelet borrowed a favorite talking point of the CCP, praising the “tremendous achievements” of “poverty alleviation and the eradication of extreme poverty” in China. Of course, any “achievements” in poverty alleviation are built on one of the many glaring human rights violations the CCP tries to deny: the detained Uyghur people are used as a source of forced labor for little or no wages.

In the backdrop of Bachelet’s trip, hacked files dubbed the “Xinjiang Police Files” were released showing the faces of 2,884 Uyghur individuals detained in Xinjiang ranging from 15 to 73 years old. The documents also revealed that CCP authorities were given shoot-to-kill orders for detainees caught trying to escape. Given the mounting evidence, there is no excuse for Bachelet’s silence on human rights abuses in Xinjiang.

The United States government has formally determined that the CCP’s actions in Xinjiang constitute genocide. Yet, Bachelet’s comments made no mention of genocide, framing the CCP’s actions as a simple management issue of the government’s counter-terrorism policy instead.

In China, Bachelet was kept in what Beijing refers to as a closely monitored “closed loop” intended to keep her in a bubble to prevent the spread of COVID-19. Although she visited two cities in Xinjiang, it’s unlikely she got the full picture of what is happening there. Secretary of State Antony Blinken rightly criticized Bachelet’s trip, noting Chinese government efforts to “restrict and manipulate her visit.”

Bachelet’s visit to China was the first for someone in her position since 2005, and human rights advocates urged her not to go. The Commissioner went despite the pleas, and the trip was exactly as advocates feared: an opportunity to spread CCP propaganda. One headline from China Daily, a Chinese state media outlet, declared “Bachelet’s trip enhances understanding of country’s human rights development.”

Bob Fu, Founder and President of ChinaAid and Senior Fellow for International Religious Freedom at Family Research Council, pointed out just how damaging this is, saying, “Ironically from this trip, the world’s supposedly highest human rights officer had become part of the communist propaganda narrative system of one of the world’s worst human rights violators.”

This isn’t the first time Bachelet has been proven spineless when it comes to the CCP. Her office has slow-walked the release of a report about human rights in Xinjiang since last year. Sadly, her recent statement is just a much more dramatic instance in which she undermined her mission to protect and promote human rights.

Fu, himself a former house church leader in China who fled the country, said, “The UN High Commissioner’s visit to China is a total categorical failure. It’s an embarrassing betrayal to both her U.N. office’s mandate and millions of Chinese persecuted who continue suffering the most grotesque human rights violations in 40 years under the current CCP dictatorship.”

Bachelet’s statement is egregious and entirely discrediting. In her role, she is the principal human rights official of the United Nations. If utilized well, Bachelet’s trip could have been a powerful opportunity to hold one of the world’s most notorious human rights violators accountable. Instead, she offered them kudos. Bachelet has undermined her own office’s mission at the U.N. and has done a grave disservice to the millions of Uyghurs and other ethnic and religious minorities in China who are unable to speak up for themselves. She should immediately apologize and resign — the gravity of her actions demands it.