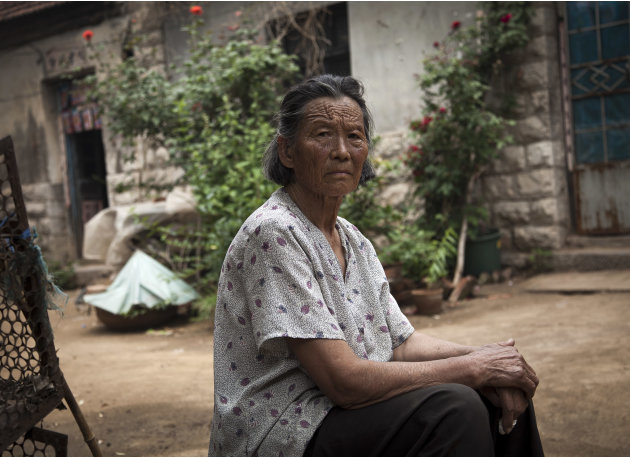 DONGSHIGU VILLAGE, China (AP) — Though the cameras and guards that kept blind activist Chen Guangcheng under house arrest have disappeared, the fear of local officials still lingers in his village and even his mother says he should not come home.

Wang Jinxiang, mother of Chen Guangcheng, takes a rest in the courtyard of her house where Chen was under house arrest, at the Dongshigu village, Shandong province, China, Friday, June 8, 2012. Cameras and security guards that kept Chen under house arrest have gone, but fear lingered among residents of his village Friday and even his mother advised him not to come home. (AP Photo/Andy Wong)

In Chen’s hometown amid the wheat fields of eastern China, most people only dared whisper his name Friday, even though he fled six weeks ago and is now in New York. They don’t want to talk about the brutal detention he and his family were subjected to during 19 months of house arrest, much less about the fellow farmers who meted out the mistreatment and still live nearby.

"The government spent lots of money to watch the little blind one," Liu Wencai, an elderly farmer, told The Associated Press as he walked down a village alley. But when asked about the hired enforcers, Liu said, "I cannot answer."

Asked about the guards who once stood at a bridge entrance to Dongshigu and chased outsiders away, a middle-aged man in blue overalls on a motorcycle refused to answer. Before riding away, he made a throat-slashing gesture as a warning that the topic of security remains taboo.

The edginess sits in contrast to the lushness of early summer and the relief some villagers feel that the heavy security has been removed — even if the threat remains. Security cameras, watchman’s huts and even piles of garbage created by the surveillance squad were all rapidly cleared away — without explanation — over the weekend.

Freshly harvested wheat lay in open spaces and women thrashed laundry by a river that borders Dongshigu, a tiny village of about 500 people some 600 kilometers (370 miles) southeast of Beijing.

Chen’s relatives were able to host reporters for the first time in the nearly two years since the activist was released from a four-year prison term only to be confined to his home.

His brother, Chen Guangfu, showed AP reporters the activist’s rural courtyard home, and his escape route: He clambered over rugged rock walls up to 4 meters (13 feet) high and tumbled into a neighbor’s pig sty, where he lay still an entire afternoon before pushing on under the cover of night.

He eventually reached Beijing where U.S. diplomats arranged with the central Chinese government for him to travel to New York for study, along with his wife and two children.

The only remaining resident at his house in Dongshigu is his 78-year-old mother, Wang Jinxiang, who frets over what food Chen finds in the U.S. and misses him terribly — "How would I not miss him?" — but who says she would not advise coming back.

"Come back for what?" she said. "He just spent all his time at home because they wouldn’t let him go out."

Chen Guangcheng and wife Yuan Weijing lived in a room where plastic sheets cover cracks in the wall and a pink mosquito net hangs over the bed, next to a three-drawer wooden desk. A pink kid’s bike stands near the door. In the courtyard, a kitten runs around a chicken coop and a dog barks at strangers.

Just a couple of months ago, security guards occupied the courtyard and formed rings around the outside of the home. No neighbors were allowed to visit, Chen’s family said.

Blinded by fever in infancy, Chen taught himself law and became known for defending the rights of poor farmers and the disabled in the wheat, soybean and peanut farming country of Shandong province. His exposure of forced abortions and sterilizations under the government’s one-child policy embarrassed local officials.

He was imprisoned on what supporters say were trumped-up charges. Then, after he was released into house arrest, local officials and the people they hired sometimes beat Chen and his wife, roughed up his mother and harassed their young daughter. Some of the hired toughs came from local communities, getting paid 100 yuan, or $16, a day to chase away unwanted visitors and torment the Chen family.

On the road outside Chen’s home, three women — taking a rest from field work — told reporters they are happier now that the security guards are gone. But they quicky dispersed when four local officials showed up and asked reporters to leave so as not to distract farmers during harvesting season.

"This village is very peaceful. Nothing happens here," one of the officials said. "It needs a quiet environment to develop its economy."

Two of them said they were from the village and two from a Yinan County team in charge of fostering economic development in Dongshigu. All refused to give their names.

Chen’s family has said the enforcers came mostly from neighboring communities, including Xishigu and Xiaobu, where Chen says government official Gao Xinjian was a ringleader in recruiting the surveillance team.
"They sold out their conscience for money," Chen Guangfu said. "It was a pretty good gig: 100 yuan per day, and three free meals. Villagers curse their ancestors, but they did not care."

The dozen or so residents of Xishigu interviewed by the AP all denied that their fellow villagers worked to guard Chen Guangcheng.

In Xiaobu, the streets were largely deserted, but a skinny, bespectacled man who ran a convenient store and who refused to give his name referred vaguely to residents who worked as guards.

"They used to be farmers, and now of course they went back to farming," he said. "They simply want to make some money."

Soon, a middle-aged man in a dark, striped shirt walked up and asked reporters to leave. He declined to give his name or identity. Later, the officials who had confronted reporters in Dongshigu arrived in a silver sedan. They threatened to confiscate the reporters’ car and then followed them out of town.