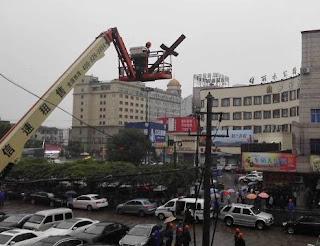 Wave of cross demolitions continues in Zhejiang province; Two pulled down on same day in Hangzhou

(Hangzhou, Zhejiang—July14, 2015) The wave of forcible cross demolitions that started last year continues in coastal Zhejiang province without any sign of letting up as two were pulled down on the same day in the provincial capital of Hangzhou while authorities removed others in Wenzhou.

Zhang Mingxuan, president of the Chinese House Church Alliance, told China Aid’s special correspondent in Hong Kong, Qiao Nong, that he had heard that only three crosses would be allowed to remain standing: one each in the cities of Ningbo, Hangzhou and Wenzhou, which is known as China’s Jerusalem for its large Christian community and has been a focal point of the cross demolition campaign.

“These are the only three that will not be torn down,” Zhang said. “All the rest will be demolished. And [the campaign] will extend throughout the whole country.”

He said that in one Hangzhou county, Fuyang, all the crosses throughout the county had been demolished.

On June 19, the cross atop the Panshi Church in Hangzhou’s Xiasha District was forcibly removed, as was the one that graced the church in the city of Lin’an. A photo showed two cranes working simultaneously to bring down the corss in Lin’an.

On June 23, authorities demolished the crosses of two churches in the city of Rui’an, near Wenzhou, which has borne the brunt of the government’s cross-demolition campaign. One of the churches was the Shangyu Church. Another Rui’an church, Zhoucun Christian Church, had also been notified that its cross would be forcibly removed.

The June 19 demolition of the Panshi Church’s cross began at 11 p.m. the previous day and continued through the night until 7 a.m. This is a common strategy employed by the government in an attempt to avoid resistance from Christians protecting their right to religious freedom.

Some 200 police, urban inspectors and cross removal personnel were inside the Panshi Church during the demolition while praying Christians gathered outside.

One church member told Qiao that all the church’s paperwork was in order and that it had every document that was required.

(Correction: A previous version contained a mistranslation of the church’s name. The name should be Panshi Church, not Panshitang Church. Additionally, the date was previously reported as June 18; however, it should be June 19.)