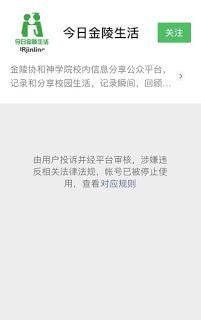 (Nanjing, Jiangsu Province—June 17, 2021) “The worst times have yet to come,” a senior Christian observer in China said in response to the Chinese Communist Party’s (CCP) recent increasingly severe crackdown on China’s internet. Authorities not only blocked the public accounts which non-registered institutions and individuals managed, but the ban has now extended to the WeChat official account of Nanjing Union Theological Seminary, which is a prominent theological educational institution of Protestant Christianity in China recognized by the Chinese officials.

Administrators of WeChat, one of the most widely used social platforms in China, have continuously tightened restrictions on public Christian accounts. They have not only blocked public accounts which non-registered institutions and individuals manage, however, but have also banned the WeChat account of Nanjing Union Theological Seminary, a prominent educational institution that Chinese officials recognize.

Recently, when netizens clicked on the official blocked accounts of Nanjing Union Theological Seminary, they saw the message: “Due to the complaints of users and reviews by this platform, leading to suspecting this site violates laws and regulations, this account has now been suspended from use.”
In recent months. administrators have routinely blocked a series of Christian WeChat official accounts. Those “disappearing” include more prominent WeChat accounts with large subscriber counts such as:

Many Christians love these public accounts which cover a wide range of information and share numerous classic works of literature. These sites also serve as platforms to share information like Classical Reformed Theology, introductory knowledge about building up the church, and personal living testimonies of some Christians.

Tens of millions of Christians subscribe to WeChat, one of the few social application platforms for active Chinese Christians. Here, through WeChat public accounts, Christians express their faith and life. In addition, both official church Christians and house church Christians frequently use this software. Therefore, even though the text filtering stays stringent, it still serves as a link between believers to obtain relevant information on matters of their faith from diverse Christian groups and public accounts.

Today, Nanjing Union Theological Seminary, a national Protestant seminary, represents the flagship theological seminary of Protestant Christianity in China, Currently under the management of the China Christian Council, Ding Guangxun serves as the first dean of this seminary. In 1952, under the leadership of the CCP, the Chinese Christian Three-Self Patriotic Movement Committee merged and based on a dozen seminaries, established Nanjing Union Theological Seminary. At this time, it remains unclear whether the ban evolved from a technical error or an authorized order from a higher level.

Administrators may determine to ban a WeChat account, however, this reportedly may only be official after the platform reviews the accounts and verifies the reported violations.

The aforementioned senior Christian observer in China asserts: “the entire internet is banning Christian social media accounts, especially those with high activity level and huge subscriber count. Once the CCP further restricts offline and online churches from gathering, the only means to access sermons will be limited to ‘party-run churches.’”

“We do not know how intense the ban will be, nor how long it will it last,” he said.

Bans like the one WeChat initiated on Nanjing Union Theological Seminary Christian literature and materials makes it increasingly difficult for Chinese Christians to obtain information about the Church. Although the CCP’s persecutions and WeChat’s bans aim to harm people, God intends for things He orchestrates and promotes to work for good. Preparing for the worst may appear meaningless, but nevertheless the worst-case scenarios might merit the best meanings.

The clampdown on Christianity within cyberspace was launched in late April. On April 29, several popular Christian WeChat accounts with “Bible” or “gospel” related titles were closed down.

Apart from church accounts, “Today’s Nanjing Union Life”, the WeChat page of Nanjing Union Theological Seminary, the only national Protestant seminary in China, has not been available since Monday

Any search using keywords including “Christ (jidu in Chinese),” “gospel,” and “fellowship” fails to get any Christianity-related public accounts. Those keywords seem to be blocked on WeChat.

###
But as for you, you meant evil against me;
but God meant it for good,
in order to bring it about as it is this day,
to save many people alive.
~ Genesis 50:20 (NKJV)
China Aid exposes abuses in order to stand in solidarity with the persecuted and promote religious freedom, human rights, and rule of law. If you wish to partner with us in helping those persecuted by the Chinese government, please click the button below to make a charitable donation.