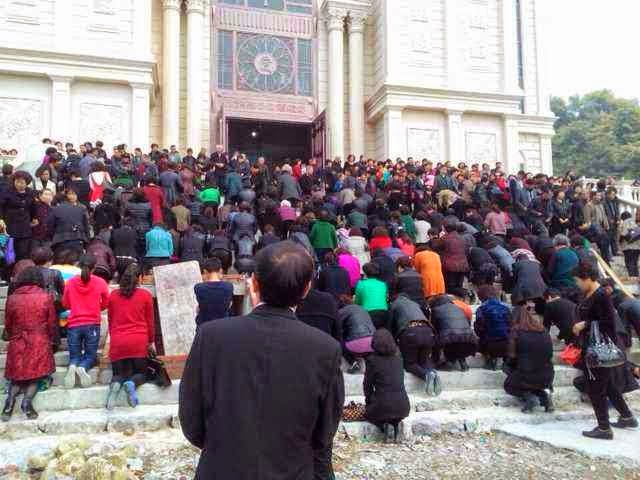 
(Wenzhou, Zhejiang—April 9, 2014) After learning of the Zhejiang government’s campaign to demolish “illegal structures,” including religious facilities, Christians in Wenzhou wrote a letter, below, asking the provincial government to end the demolition campaign, saying it was not “properly conceived” and “would intensify social conflicts.”

In 2014, frequent incidents have occurred across [China’s coastal] Zhejiang province, in which crosses and churches are to be demolished. Since March of this year, Christian churches in Yongjia, Leqing, Ruian and other places subordinate to Wenzhou city have received notices that they should demolish their crosses and churches. This has brought great confusion among the believers and has caused a tension between the church and the state. To safeguard the freedom of religion and promote the peaceful coexistence in the society, Christians in Wenzhou have, after sincere prayers and discussion, issued the following declaration:

1. Christianity was introduced to China hundreds and even thousands of years ago and has become a component of the Chinese society and culture. A cross is a holy external marker of Christianity. The cross on top of a church is the primary identification of Christianity. When the government suddenly ordered the churches to take down their crosses, rectify, and improve the crosses, it was a brutal interference in the believers’ practice of their faith, and it greatly hurts the religious feeling of a large number of believers.

2. A church is a holy site where Christians worship God. Tearing down the crosses and churches would invariably disrupt the otherwise normal religious life of the Christians. The Chinese Constitution endows the citizens with the freedom of religion and the government should reasonably and legally safeguard the religious rights of the citizens.

3. It is our belief that saints are of one entity, and that the believers and Jesus Christ are connected together. Protecting crosses and church buildings from being demolished is the common responsibility and obligation of Christians of all different sects, traditions and regions.

4. If some floors of some churches were built by violating the building codes, it was caused by complicated historical and regional factors. We urge the churches to be humble and to inspect the problem themselves, sincerely accept the supervision by the government, and according to public opinions, process some relevant paperwork to make up for the absence of the necessary paperwork and request the government to deal with this problem according to specific circumstances. We hope both sides will uphold righteousness, consult with each other in a friendly manner and jointly seek blessedness.

5. We call on Zhejiang provincial government to immediately terminate their operation of “demolishing the crosses and churches.” This operation is not properly conceived, would intensify social conflicts and is harmful to the otherwise long peacefulness and unity in China. As Christians, we sincerely hope to see a prosperous and peaceful China, which glorifies God and benefits men.