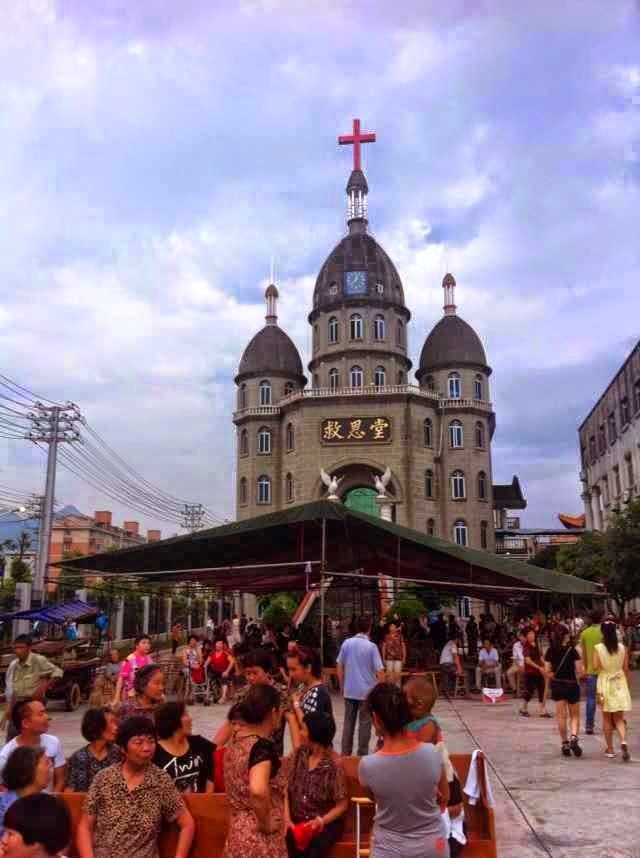 (Wenzhou, Zhejiang—July 18, 2014) A pastor formerly of China’s coastal Zhejiang province reported that Pastor Zhan Yingsheng of the persecuted Wenzhou-based Salvation Church resigned from his position and relocated to the church’s clock tower where he plans to live out his life fasting, praying and preparing himself to be martyred.

Zhan wrote a will, below, in which he discussed his decision. Following the will is a letter of resignation Zhan sent to the Pingyang County Chinese Christian Congress/Three-Self Patriotic Movement.

My name is Zhan Yingsheng, and I am a man of Han ethnicity. I was born on June 16, 1971. I’m a Christian and a student majoring in the Bible at Zhejiang Theological Seminary. The following was written when I was very clear-minded. When you read it, you are lucky to be one of the witnesses.

First of all, I would like to declare that what I’m doing now is not for making a show or trying to get some publicity. Instead, I’m doing so because there is no other alternative. However, for my friends and relatives, please be assured that due to my Christian belief, I won’t choose suicide. If on one of these days you hear that I’ve been called to heaven, that probably means I’m lucky enough to have joined the ranks of martyrs (Jesus’ apostle Paul reminds us that being with Christ is much better).

The most important reason for this is that I’ve seen brothers and sisters of churches in various parts of Zhejiang province [grow] panicky amidst the storm of illegal demolition of crosses by some government agencies. To hold onto their faith, brothers and sisters guard their crosses, which are not illegal structures. They have been guarding the crosses for more than 20 days in various churches and for some, it’s already [been] more than a month. Many brothers and sisters work in large businesses, real estate and some of them make a living by keeping a small store, and they are guarding the crosses in spite of the blatant threats coming from the government officials.

In China, the country that is supposed to be under the rule of law, some government officials put their will above the law. In the meantime, their subordinates, in order to get promoted for their “performance,” disregard the law and the disciplines, and trample on the faith of the Christians. They compete with each other in the number and speed of demolitions so that they can win prizes. Whenever I see this, my heart bleeds. That’s why I’ve decided today to go live in the clock tower under the cross of the church to pray and to fast with my Bible and hymns.

The county government has the primary goal of demolishing, through force, the Salvation Church. They have given their threats to the church’s co-workers through various levels and departments. If we guard against the demolition with all our efforts, the eventual result will be even worse than Sanjiang Church (I understand very well that if [the officials] don’t do this, their positions would be jeopardized). Facing such a powerful foe, neither the co-workers nor I have particular confidence that we can certainly prevent the church’s cross from being demolished.

As an individual, I implore the Lord to give me the will of a martyr. I will need it especially during the demolition of our church’s cross. I don’t mean I would like to become a martyr for a 6-ton cross. Instead, as a Christian facing unrighteousness, my conscience urges me to do my duty. I wish to better understand the meaning of “Christ calling on me to die for Him.” If the martyrdom or tribulation of some Christians can make the storm of this demolition campaign quiet down and the spirit of rule of law come true in the various fields of our country, may the Lord support me solidly!

It is indeed very difficult to choose. First of all, I think of my wife who led me into believing the Lord. In that same year, I got to know her and dedicated myself to the Lord—1992. Twenty-two years have passed in the twinkling of an eye. Besides the Lord Jesus who died on the cross for me, the person whom I owe the most is she. Together, the two of us worked hard, and we finally had a home at 152 N. Shanglin Road that we still have now. Together, we raised a daughter, who is now in her second year in high school. Originally, both of us were engaged in the apparel business. In 2005, God moved me and called on me to serve full time in Shuitou Salvation Church. Starting from 2007, I began to equip myself and most of the time I studied everywhere and all the household work was done by her.

My dear, if I go and leave you, you’ll have to raise our daughter yourself. If God prepares for you a husband in Christ, remember you must obey Him and live a good life by relying on the Lord. My mom and dad are yet Christians, and they are my biggest burdens. After I graduated from high school, I was away from home for many years and didn’t do my filial duty for them. I’d like you to visit them from time to time when you have time after praying.

Yilin, as it was my first time to be a father, I didn’t have much experience. While you were growing up, I failed to give enough much time to guiding you. Though it was out of love for you that I disciplined you, I didn’t have the correct methods. And sometimes, I beat and scolded you out of anger. You must be hurt at heart. I hope you can gradually understand me. My dear child, given the present condition, you should study hard at your age so that you can stand a better chance in finding a foothold in society and you would have better chances in testifying for Jesus. If I can no longer give you a lecture in the future, please remember self-discipline. Life is very hard for Mom, and your emotional intelligence should be very high. I believe you will do your filial duties well as I have trust in you. Don’t complain about God. He is ready to help you, and you should remember to look for His help whenever you need Him.

Dear co-workers, in the midst of current bad circumstances, remember you must be united in God as one, love each other, and help the vulnerable groups. Don’t fall into the scheme of the devil by attacking each other. Instead, try to forgive each other and understand each other in the love of the cross (This love is way above what we can understand under usual circumstances).

Dear relatives and friends, thank God that all of you are in my life; you have brought so many beautiful things to my otherwise insipid and stale life. Moved by the Lord, I began writing yesterday afternoon. As I’ve been writing until now, I’m already dead. Those relatives and friends who know me well know that I am a man afraid of death, and I lived in cowardice and am without my own opinions. Though “the most difficult thing in life is death,” the love flowing from the blood on Jesus’ cross is stronger than death. Thank the Lord for strengthening me with this love! I hope that in the kingdom of glory, I will be able to see every one of you. Remember that Jesus loves you as well as me. May God give blessings to everyone of you!

My name is Zhang Zhengchuang, and my ID No. is 330326196504105310. In recent years, I have had many diseases, my strength is continuously failing me, and I can no longer serve for Pingyang County CCC/TSPM. Therefore, I have decided out of my own will to resign from all positions at CCC/TSPM.

Yours,
Zhang Zhengchuang
Person of resignation