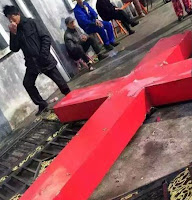 China Aid
Reported and written in Chinese by Qiao Nong. Translated by Carolyn Song. Edited in English by Ava Collins.


(Wenzhou, Zhejiang—March 29, 2016) Authorities demolished more than a dozen church crosses in China’s coastal Zhejiang in the past week, and altercations with protesting church members grew violent to the point of hospitalization on at least one occasion.

Since 2014, the prefecture-level city of Wenzhou, Zhejiang has been the focus of a massive “beautification” campaign known as “Three Rectifications and One Demolition.” Over the course of the campaign, Wenzhou authorities have demolished more than 2,000 church crosses, often claiming that the structures are illegally constructed.

Members of affected churches often gather outside their church in an attempt to stop the demolitions or turn the authorities away. However, recently, demolition teams have been composed of larger groups of officials—anywhere from 20 to more than 100—and show a willingness to use force to dissuade and disband protesters.

On Friday, a demolition team of more than 100 people took down the cross atop Shangen Church and severely injured a female church member, who was among the protesters. The woman was knocked to the ground and later taken to the hospital for her injures. Police and security guards at the demolition were armored and carried riot shields to hold back church members.

“[The officers] ordered us not to resist. [They said] if we put up a fight, they would tear down the church instead,” an anonymous member of Fenggangta Church told China Aid’s reporter on Sunday. Other sources reported similar threats from authorities.

China Aid reports on events such as unlawful cross demolitions and the violent treatment of protesters in order to expose abuses by the Chinese government and promote religious freedom and rule of law.