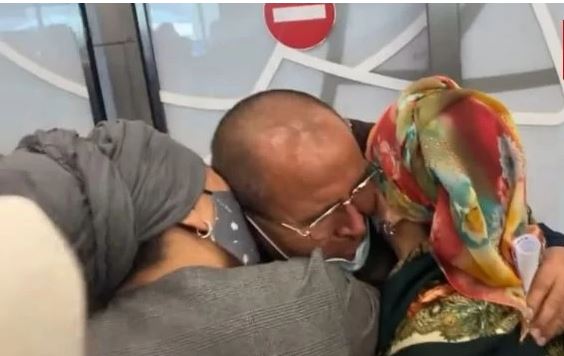 Bitter Winter, “a magazine on religious liberty and Human Rights,” published the following on April 16:

His wife’s picket at the Chinese consulate in Almaty got so much attention that the CCP decided to give up, [and] set her husband free after 17 years of detention.

Those who insist that picketing and protesting outside Chinese embassies and consulates is a waste of time were proved wrong last week in Kazakhstan.
An ethnic Kazakh woman from Xinjiang, Farida (also spelled Paryda) Kabylbek, who had been picketing the Chinese consulate in Almaty, achieved the return of her husband Rakhizhan (also spelled Rahizhan) Zeinolla. A resident of Almaty, Farida Kabylbek, not only protested in front of the Chinese Consulate in her home city, but also picketed the Chinese General Consulate in Nur-Sultan.
On April 9, 2021, she and her relatives and friends finally met her husband at the Almaty airport. The aircraft arrived from the Chinese city of Chengdu.

This is the story of an amazing woman, whose husband was arrested without evidence when he went to Xinjiang from Kazakhstan, and kept in jail for 13 years. After this, he was put into a camp, then remained under house arrest. And only 17 years after his arrest was he able to reunite with his family.

###
… though he will not rise and give to him because he is his friend,
yet because of his persistence
he will rise and give him as many as he needs.
So I say to you, ask, and it will be given to you;
seek, and you will find;
knock, and it will be opened to you.
~ Luke 11:8-9 (NKJV)
China Aid exposes abuses in order to stand in solidarity with the persecuted and promote religious freedom, human rights, and rule of law. If you wish to partner with us in helping those persecuted by the Chinese government, please click the button below to make a charitable donation.