Why Do Christian Groups in China Put Authorities on Red Alert? 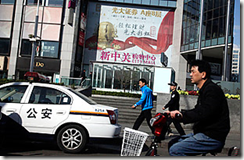 TIME  By Ursula Gauthier / LE NOUVEL OBSERVATEUR / Worldcrunch Thursday, June 02, 2011
This post is in partnership with Worldcrunch, a new global news site that translates stories of note in foreign languages into English. The article below was originally published in LE NOUVEL OBSERVATEUR.
(A plain-clothes man and a uniformed police officer walk towards a police car near an area where members of an underground church had planned to gather for worship in Beijing Sunday, April 17, 2011.)
(BEIJING) — Every Sunday at 8:30 a.m. sharp, you see them coming to the unwelcoming square in the middle of the university neighborhood in Beijing. Skinny young girls dressed in jeans and wearing ponytails, elegant couples in their 40s, distinguished men that look like retired teachers: they all gather here with a funny mix of hesitation and bravery on their faces. Minutes later, the anti-riot police intervene and arrest them without encountering any resistance. On the bus that takes them to the police station, they open their prayer book and start singing liturgical songs.
The people who so bravely defy the formidable security forces every week belong to the Protestant Shouwang church, the biggest and best known “house” church in Beijing. Shouwang means “to keep watch” in Mandarin. Notoriously independent, they refuse to let themselves be absorbed by the official “patriotic” church, which sits entirely in the government’s fold. This autonomous group of worshippers holds their services at one of their member’s homes, or in a simple conference room rented especially for the occasion. (See pictures of the making of modern China.)
The devotees elect their ministers — the members of the small “elders” committee charged with governing the church — and they are deeply dedicated to the life of their community.
“We have absolutely no political agenda, and we are not opposed to the government,” a Shouwang official who is now under house arrest recently said. “We only want one thing: to freely practice our religion.”
So why are the Chinese authorities so dead set against the church? Several dozen Shouwang devotees are detained every week. Since the

Website: www.chinaaid.org beginning of the civil disobedience movement, more than 300 of them have been questioned by police and pressured into signing a disavowal of their spiritual guide before being eventually freed. Six Shouwang members have nevertheless been assigned to house arrest in recent months, with rumors circulating that they’ll soon be thrown in jail.
According to Bob Fu from China Aid, an American NGO which focuses on the life of China’s Christians, Beijing has always had a very bad opinion of organized groups, whatever they might be. (See pictures of China at 60.)
Founded in 1993 by the charismatic minister Jin Tianming, who was then a young chemical engineering graduate of the prestigious Tsinghua University, the number of Shouwang devotees has grown from 10 to 1,000 over the past 15 years. This has attracted the ire of the authorities, who have constantly harassed them and even forced them to change headquarters more than 20 times.
“Two recent events explain the government’s attitude,” says Bob Fu. “First, there was the fact that in 2010 Shouwang was preparing to send 200 delegates from around the country to the international evangelical conference in South Africa.”
Alarmed by their capacity to coordinate and their desire to present themselves as the legitimate representatives of Chinese Protestantism, the government banned the delegates from leaving the country. “And then the ‘jasmine revolutions’ started. Fearing [the Arab world’s revolutionary spirit] would spread, Beijing decided to break Shouwang down,” says Fu.
In 2010, Shouwang worshippers managed to gather $6 million in donations. The money would have bought them an entire floor of a building in the university neighborhood. But the sale was cancelled under pressure from authorities. The church had to settle instead for a big conference room, rented from a posh restaurant. Several months later, that contract was cancelled as well, for the same reasons, leaving the devotees without any roof over their heads. (See TIME’s photo-essay “A New Look at Old Shanghai.”)
“They would like to split us up, or, even better, dissolve us altogether,” says one of the Shouwang worshippers. “We will never allow that to happen. We have not turned ourselves to the Savior to find ourselves listening to so-called ministers who are bureaucrats in reality and who follow the orders of the Communist Party’s atheists!”
With its 40 Biblical reading groups, choir, catechism, its faithful (typically members of the new bourgeoisie — professors, doctors, lawyers, students, and even Party members), Shouwang gains dozens of new converts each month. For the regime, it is the strongest symbol of the wave of religious conversion that has swept over the country of late. Urban, educated, disgusted by the “red” discourse served by the media, and fed up even with the cult of consumerism, the new, Christ-conscious Chinese upper class is on a moral collision course with a government that it perceives as soulless.
The numbers speak for themselves. A survey conducted in 2006 suggests that about 300 million Chinese (31% of the population) practice a religion. Government estimates put that number far lower. Among Chinese religious practitioners, two-thirds declared themselves Buddhists or Taoists. The remaining third (100 million people) are Christians.
A leaked report dating from the same year suggests that the real number of Chinese Christians is closer to 130 million — up from just 5 million in 1949 when Mao came to power. Roughly four-fifths are Protestants. In the past 60 years, in other words, the number of Chinese Christians has multiplied by a factor of 25. They now make up between 7%-10% of the population, meaning that Christianity is quite possibly the second religion in China. (See how China detained dozens of Easter worshippers.)
The growth of Christianity is all the more remarkable considering it occurred despite decades of bloody persecution under Mao, who viewed the religion as a “foreign” doctrine used to serve the interests of capitalist imperialism. Christianity has now adapted to the local realities and is no longer seen as a strange faith imported from elsewhere. Millions of new devotees are convinced that China will become Christian in a matter of two or three decades.
Read more: http://www.time.com/time/world/article/0,8599,2075386,00.html#ixzz1OBWdfHpg