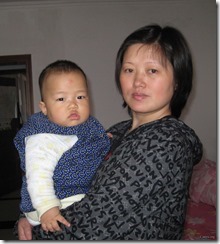 (Beijing–April 21, 2013) The wife of Christian and longtime political dissident Zhao Changqing has issued an appeal for help after he was taken into police custody, apparently because he had called for government officials to disclose information about their financial assets.

Dozens of police swarmed into the couple’s home in Beijing on Wednesday (April 17) and searched it for many hours.  Zhao, whose political activism dates back to the 1989 Tiananmen Square student-led pro-democracy movement and who later became a Christian, was criminally detained for attending an illegal meeting.

His wife Liu Xiaodong (photo above right, with son; source: www.canyu.org) has written the appeal below:

Ladies and gentlemen,
My name is Liu Xiaodong and I am an ordinary Beijing office worker. On April 17, more than 10 police officers broke into our home and took my husband Zhao Changqing away. They filled my home and searched it from the afternoon till deep in the night. My nine-month old son watched all this from my arms. He didn’t understand what was going on and he even smiled at these police officers.
The next day, I received a notice of detention that said that my husband Zhao Changqing had been placed under criminal detention on suspicion of attending an illegal meeting and was being held at a detention center. Both my child and I are deeply perplexed because my husband usually doesn’t go out. Since I’m busy at work, he takes care of our child at home. When he occasionally goes out, he seeks out places that are quiet and free of crowds. I really don’t know how a “house husband” like this could have gotten involved in an illegal gathering.

My 9-month-old child still doesn’t know that his father is now living in a detention center in a cell with one toilet for dozens of inmates. Whenever he sees a man of his father’s age with eyeglasses, he cannot help opening his arms to get a hug, because every time he used to do this his father would hug him to his chest with all his love.
Now, both my child and I are hoping and waiting for him to come back to us safely. However, given the situation we face, not only do I know nothing of what really happened, I also feel totally helpless. Until my husband comes back to us, the only thing I can do is try my best to take care of the child and support this family.

Ladies and gentlemen, today, I, the wife of the detained Mr. Zhao Changqing, an ordinary Beijing office worker appeal to you people from various walks of life to pay attention to my detained husband, and to follow the progress and to pay attention to the real facts and to his safety and health. With sincere thanks to all and with a heart full of hope.