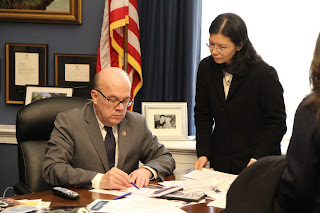 (Taipei, Taiwan—May 7, 2019) The wife of a human rights advocate currently imprisoned in China on falsified charges finally was permitted to see her husband on April 22 after being banned from visiting for three months.

Before that, Li Chingyu last saw her husband, Li Mingche, in December. After returning to Taiwan, she held a press conference, saying that he suffered maltreatment in prison, including more than 10 hours of forced labor every day, the freezing of his bank account so that he couldn’t use the money his family gave him to buy better food, and prison authorities feeding him spoiled meals.

Her words sparked ire from the Chinese government, who slapped her with a three-month ban from seeing her husband. A spokesperson from China’s Taiwan Affairs Office alleged she had “spread untruthful words on purpose,” and Chishan Prison in Hunan, where her husband is being held, said she interrupted their normal law enforcement. Finally, escorted by personnel from the Straits Exchange Foundation, Li Chingyu entered China and saw her husband on April 22.

In the past, her applications to visit Li Mingche have been denied.

Two months ago, United States Ambassador-at-Large for International Religious Freedom Sam Brownback traveled to Taiwan, and Mrs. Li had the opportunity to meet with him. When a reporter asked Brownback what specific plan the U.S. had to urge China to release Mr. Li, the ambassador answered that the low-key approach employed in the past has been ineffective, and the priority was to raise public understanding of his case.

He also said, “If China does not take any actions, the U.S. may not rule out using specific approaches and may take further action.”

Some interpreted these words to mean the Trump Administration might enact sanctions against China, but ChinaAid has not verified whether or not this will take place.