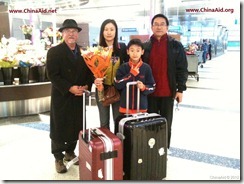 (Los Angeles—Jan. 23, 2012) With the assistance of ChinaAid and a number of churches in the United States, the wife and child of well-known Chinese political prisoner and Christian Guo Quan have left China and arrived Monday in Los Angeles.

(Photo: Ms. Li Jing and her son, Guo Yi, are welcomed at LAX by Prof. Eddie Romero, left, and former prisoner of conscience Wu Chaoyang. Click on photo to enlarge.)

Guo’s wife, Li Jing, and their 12-year-old son, Guo Yi, traveled by way of Indonesia, Singapore and South Korea. They were met at the Los Angeles airport by the director of ChinaAid’s LA office, Prof. Eddie Romero, also pastor of Hacienda Christian Fellowship, and Christian human rights activist Wu Chaoyang, a prisoner of conscience from the 1989 Tiananmen Square pro-democracy movement who had earlier arrived in the United States. Ms. Li and Guo Yi are devout Christians.

They will be appealing to the U.S. government and international groups to pay close attention to Guo’s case and for help in winning his release. ChinaAid will help them settle in the United States and attend school.

“After going through so much obstacles, on the first day of the Chinese New Year, Mr Guo’s family got to the US safely ,” said Bob Fu,” with situation on human rights and religious freedom in China worsening, we appeal to the international community to hold Chinese regime accountable for the grave violation of its citizens’ basic rights and freedom. We urge China to release all prisoners of conscience like Mr Guo Quan, Gao Zhisheng and Alimujiang Yiti, Chen Guangcheng, Chen Wei, Chen Xi, Li Tie, Liu Xianbin , Zhu Yufu, Liu Xiaobo and many others. “

This is a biographical summary provided by Human Rights in China (http://www.hrichina.org/crf/article/5708):

Guo Quan (郭泉), born in 1968, was raised in a revolutionary family: relatives in his parents’ generation were all members in the Communist Party of China (CPC). From a young age, he displayed a love of learning and had broad interests. After entering the work force, he continued to pursue his education and was admitted as a graduate student at Nanjing University, where he earned a Master’s degree in legal studies, and a doctorate degree in philosophy.

In 1990, after graduating from vocational college, he declined a position at the Jiangsu Provincial Public Security Department. Through open recruitment, Guo became a secretary of the Nanjing Municipal Economic Reform Committee, and editor of the magazine Reform and Openning [sic]. During his graduate studies, also through open recruitment, he worked as a judicial officer in the criminal division of Nanjing Intermediate People’s Court.

In 2001, Guo became an associate professor and a supervisor of master’s students at Nanjing Normal University. That same year, he joined the Chinese Democratic League—one of China’s eight state-approved “democratic” parties. Later, because of his open letters that criticized the government, he was stripped of his associate professorship and made a data management officer at the university library.

An industrious thinker and writer, Guo is the author of such books such as the Study of the Buddhist Idea of Harmony in Sui and Tang Dynasty, and Freedom and Literature. As a citizen concerned with public issues, he initiated the “Defend Diaoyu [Senkaku] Islands” boycott against Japanese goods and was frequently summoned by Chinese authorities. Guo also called for government reform, called for multi-party democratic elections, and wrote Forecast of Democracy, a collection of 347 articles. He was also active in rights defense campaigns and spoke out openly for victims of the Sichuan earthquake.

In 2007, Guo began calling for a multi-party system, a nationalized military and other reforms in a series of open letters to top government leaders. In December that year, he formally announced on the Internet that an opposition party he had founded three years earlier, the China People’s Livelihood Party, has been renamed as the “New People’s Party of China.” This act angered the government authorities. Guo was subsequently arrested, and was convicted of “subversion of state power” in October 2009, He was sentenced to ten years in prison and is serving his sentence at Pukou Prison in Nanjing.

Guo believes that many people in China do have ideals, but that ideals must be accompanied by action. He thinks he is the most audacious—for daring to speak out and to take action—possessing an audacity that is born of ideals.