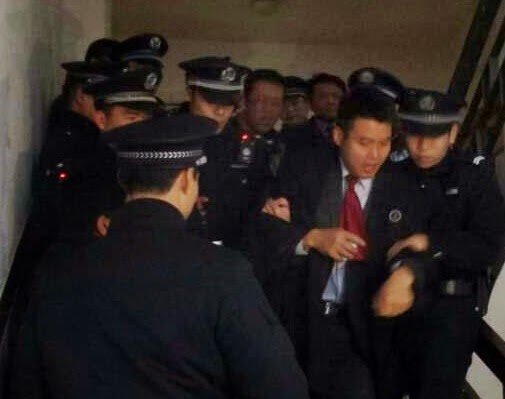 (Liuzhou, Guangxi—Feb. 16, 2015) The wives of two defendants in the Hualin Kindergarten case, in which four are accused of “illegal business operations” for their involvement with character-improvement books compiled by the church that founded the school, wrote letters, recounting their experiences and feelings from the time their husbands’ were detained up to the opening of the trial last week.

Both Xin Xuemei, wife of Liangren Church elder Huang Quirui, and the wife of Fang Bin, a man contracted to print the textbooks, detailed the questionable actions by government personnel on many levels that have occurred since the detention of their husbands’ on June 23-24, 2014. Fang’s wife chose to remain anonymous. Their letters can be read below:
A Letter from Huang Quirui’s Wife

My name is Xin Xuemei, and I’m a Christian. My husband is Huang Qiurui, an ordained elder at Panshi Church and Liangren House Church in Guangzhou. He has been a Christian for 37 years. Since he was young, my husband has been taking care of the worshippers at his church. All my family has been serving the Lord while working in our secular jobs, just like Paul who served the Lord while weaving tents because he didn’t want to bring a burden to the church.

Since we became Christians, our family has suffered the authorities’ suppression on numerous occasions. We were kicked out of Shenzhen so we went to Dongguan. Then we were again kicked out of Dongguan, and we went to Guangzhou. Our businesses and ministries were shut down and banned by the government several times. Wherever my family went, we never violated this thought from heaven: “As for me and my house, we will serve the Lord.” First, we built a temple and a church to serve the Lord. Therefore, the local Domestic Security Protection Squad (DSPS) agents regarded us as a thorn in their side and would find various excuses to suppress us.

In 1987, my father-in-law and my husband were arrested and imprisoned for smuggling Bibles on a ship from Hong Kong to Chongqing. In prison, my husband was once beaten so badly that three of his ribs were broken.

In 1997, because we founded a church for migrant workers in Shenzhen and Dongguan, our family suffered suppression at the hands of the local police, who ordered us to shut down our store and leave Shenzhen and Dongguan within 24 hours. When we went back to our native home in Shantou, Guangdong, we immediately and completely committed ourselves to building churches and preaching the Gospel.

In 2003, we came to Guangzhou again, where we did some business while participating in campus ministry in the university town in Guangzhou. Within 10 years, we organized five or six house church gathering places in Guangzhou and Dongguan.

Approximately three years after the 2008 Sichuan earthquake, my husband was sent as a relief worker by the church to teach at the “Home of Lamb Children.” Because of his relief work, the church in Guangzhou suffered great persecution. Guangzhou Nixi Bookstore, which was run by the church, was forcibly shut down by authorities.

In the past 10-or-so years, the state security agents have never stopped stalking and suppressing us! In spite of all of this, God still gave us a firm confidence to serve and follow Him.

On the evening of June 23, 2014, DSPS agents from Guangxi crossed the border between Guangxi and Guangdong into Guangzhou to arrest Christians. They framed my husband, charging him with the ambiguous crime of “illegal business operations.” This is the second time in his life that he has been imprisoned. The reason my husband was framed is because he helped another church member by shipping some character-development teaching materials compiled by the church to her at a kindergarten in Liuzhou.

After my husband was taken into custody, Liangren Church and Panshi Church were suppressed on many occasions and were prohibited from gathering at their original meeting places. We were like a group of sheep who did not have a fixed place to live. However, we never succumbed to the tribulations we were suffering from, and we remain firm in our faith. We didn’t stop our Sunday worship. I think this strength was bestowed to us by our heavenly father, by whom we stand firm in the storm.

It has already been more than seven months since my husband was taken into custody. He has been detained on a long-term basis at the Liuzhou Municipal No. 1 Detention Center in Guangxi. Now, he isn’t allowed to exchange letters with others. All the letters and the Bible sent to him by his relatives and church members were confiscated. In prison, he has been treated unfairly. Every day, he is forced to work 11 hours of hard labor. In the harsh winter, he has to drink cold water and wash himself in cold water. They decided to convict my husband and keep him from regaining his freedom so that he can never lead a church again. For this, I feel extremely pained at heart! I can only pray every day, in tears, and implore the Lord to be merciful and show His grace! I hope all of you who are far away from us know the true situation that Chinese house churches find themselves in and the truth about religious persecution in China so that you can become the ambassadors of God and the courageous fighters in prayers! Amen!

My husband, Fang Bin, worked in Guangzhou as a middleman in the printing business. That is to say, whenever people needed to something printed, they would contact us, and we would contact a printing factory, making some money in between the two. At about 5 p.m. on June 23, 2014, a group of people came, saying they were from the Yufeng Branch of the Liuzhou Public Security Bureau, and took my husband away. At the time, they said they needed to talk with him about some matters. He was taken to Tangxia Police Station in Tianhe District, Guangzhou. Sometime after 8 p.m., they told my husband to call me, and he asked me to bring a change of clothes, saying that the people wanted him to go to Liuzhou and that he would be back in three to five days.

I came to Tangxia Police Station and asked the police officer who took my husband away why he did so. He told me that some teaching materials my husband printed for a kindergarten were sold illegally. I told the police officer that the client told my husband these teaching materials were internal, for her own kindergarten, before printing occurred. We were just the middleman in arrangement. When we got the order, we took it to the printing factory. Whether our client sold them or not, we didn’t know and there was no way we could control it. The officer then said to me that he would just let my husband go to Liuzhou to clarify the matter and that he would be back in two or three days.

In all helplessness, my family members and I could only hope that the facts would be uncovered and that my husband would come back soon. However, once he left, they accused my husband of engaging in “illegal business operations” and locked him up in Liuzhou Municipal No. 1 Detention Center. It has already been more than six months since he was detained. My daughter asked me all day long where her dad went and said she missed her dad very much. My son is still too young to understand. After my husband was taken into custody, I took up his business in Guangzhou and there was no way I could take care of the children. Therefore, I took the children to my hometown and let my parents take care of them.

We waited eagerly and finally the lawyer notified me that the case would be tried in court on Dec. 23, 2014. My family members and I left our jobs and took a 10-hour train ride to Liuzhou. When we saw the lawyer on Dec. 23, the lawyer said the case might not be tried on that day, after all. I really couldn’t understand this. My husband’s family members and I are not locals, and we took great pains to come here only for the court to simply say it wouldn’t hear the case at that time. Why didn’t they consider the family members? As a result, we had to go back to Guangzhou.

On Jan. 8, 2015 or so, I again received a notice that the case would be tried in court on Jan. 16. Again, my family and I traveled to Liuzhou where the court tried to force the lawyers to go through a security check. There, both the court and the lawyers refused to budge, and again we had made a fruitless trip to Liuzhou. It was not until Feb. 6 that the long-expected court trial began. However, the judge and prosecutor colluded with each other, and I was disappointed to see that they abused their power. It is difficult to believe that the court will give us a fair trial. Later, I learned that this case was created in order to persecute the other defendants’ religious beliefs and their church.

Though Fang Bin is not a Christian, he was forcibly included in the case so the authorities could cover up the fact that they are persecuting people based on their religion. On Feb. 9, when the court went back into session, the judge, Qi Songmei, used an excuse to remove five lawyers, who represent the other three defendants, from the courtroom; only Fang Bin’s lawyer remained. In spite of the other defendants’ lawyers not being present, the judge continued to try the case. The court simply ignored the issues brought up by our lawyer—that the public security bureau, the procurator, and the court had violated the law. After that, the court officials even persecuted my husband’s lawyer because he is from Liuzhou. When they put a witness on the stand, my lawyer asked the witness some questions, but the judge simply wouldn’t let the witness answer. During the entire trial, the chief judge and the prosecutor colluded with each other and tried to cover up the true intention of the trial.