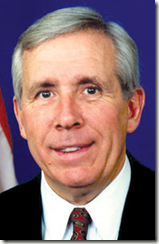 WOLF APPOINTED BY SPEAKER TO CHINA COMMISSIONWashington, D.C. (November 4, 2011) – Rep. Frank Wolf (R-VA) today announced that he has been appointed to the Congressional-Executive Commission on China(CECC) by House Speaker John Boehner.

Created by Congress in October 2001 with the mandate to monitor human rights and the development of the rule of law in China, the panel is made up of nine Members of the House, nine Senators and five senior members of the executive branch.

The commission was created in the wake of China being granted Permanent Normal Trade Relations (PNTR) in 2000.  At the time of passage there was significant – and ultimately well-founded – concern that once China secured PNTR, Congress would lose a valuable legislative mechanism to shine a bright light on China’s manifold human rights abuses every year, Wolf said.

Wolf was outspoken in his opposition to PNTR for China and has long been a critic of China’s horrific violations of basic human rights and religious freedom.  In testimony Wednesday before the House Foreign Affairs subcommittee on Oversight and Investigations, Wolf detailed the Chinese government’s repression of people of faith.

“China is an equal opportunity oppressor,” Wolf said.  “According to the Cardinal Kung Foundation, currently every one of the approximately 25 underground bishops of the Catholic Church is either in jail, under house arrest, under strict surveillance, or in hiding.  Protestant house church pastors are routinely intimidated and imprisoned and their congregations harassed.”

Wolf also serves as the Republican co-chair of the Tom Lantos Human Rights Commission.  The commission regularly holds hearings and briefings on a variety of global human rights issues.  On Thursday, it convened a hearing on human rights in Tibet at which commission members heard from His Eminence Kyabje Kirti Rinpoche, the spiritual leader of the Kirti Monastery where the recent wave of self-immolations have occurred.

“Tibetans are witnessing the annihilation of their distinct cultural heritage,” Wolf said.  “Just this week another young Buddhist nun set herself aflame in desperation at the abuses suffered by her people.  Falun Gong practitioners are reportedly tortured.  Uyghur Muslim activist Rebiya Kadeer has seen her own family used as pawns by the Chinese government and two of her sons are presently imprisoned.”

The CECC’s mandate requires that the commission maintain an up-to-date list of prisoners of conscience and other victims of human rights abuses in China.

“The database is an invaluable resource if only U.S. government officials take the opportunity to raise these cases by name when they meet with Chinese government officials, in the same manner that President Ronald Reagan did with the Soviet Union,” Wolf said. “Time and again we hear from formerly imprisoned dissidents in repressive regimes the world over that their lives improved when the U.S. advocated on their behalf.”

Wolf travelled to China in June 2008, prior to the Beijing Olympics, with CECC co-chair Rep. Chris Smith.  During a two-hour meeting with Ambassador Li Zhaoxing, the former Chinese Foreign Minister, Smith and Wolf presented Ambassador Li with a list 734 other political prisoners compiled by the CECC and pressed for their release.  A copy of the current prisoner list is available at www.cecc.gov.

“The Chinese government brutally represses its own people, persecutes all people of faith, censors the Internet and maintains labor camps,” Wolf said.  “The Chinese government actively engages in cyber attacks against private companies and the U.S. government, including congressional offices.  It steals state secrets and robs Americans of jobs through economic espionage.
“China aligns itself with countries directly at odds with U.S. interests, supports genocidal governments like the one in Khartoum and buttresses rogue regimes,” Wolf continued.  “I intend to use this appointment to the CECC to expose the Chinese government for what they really are and to stand with the Chinese people in their quest for basic freedoms.”
http://wolf.house.gov/index.cfm?sectionid=34&itemid=1817