(Tiepo village, Hubei–June 1, 2013) A woman in Hubei province who was six months pregnant died from massive blood loss after she was forcibly aborted of her unauthorized baby. 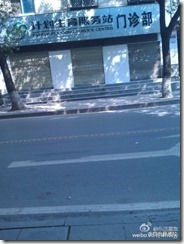 Zhang Yinping, 26, originally from Shaanxi province, died at 2 p.m. May 23 in Tiepo village, in the town of Yuyue, which is in Jiayu county. She was forcibly taken to the Yuyue Family Planning Center for a forced abortion because she did not have permission to get pregnant. After the procedure, she lost too much blood and rescue efforts at the county’s People’s Hospital failed to save her life.

The next morning, Zhang’s family surrounded the Yuyue Family Planning Center, whose doors were tightly shut (see photo at left). Police were mobilized.

Jiayu county has applied for a review of medical malpractice in this case of the death of a pregnant woman, and ordered the department that handled the operation to suspend operations and reorganize. The persons responsible are being investigated.

Below are comments posted on Weibo, a "micro-blog" similar to Twitter:

【How many more mothers will family planning kill?】Around 14:00, May 23, 26-year-old woman Zhang Yinping, residing in the village of Tiepo, town of Yuyue, Jiayu county, was forcibly brought to the Yuyue Family Planning Center to undergo a forced abortion because she was more than six months pregnant without authorization; she died after the procedure from massive loss of blood.

May 23, around 14:00, pregnant 26-year-old woman Zhang Yinping, residing in Tiepo village, town of Yuyue, Jiayu County went to Yuyue Family Planning Center for an abortion because her pregnancy was unauthorized. Due to massive blood loss after the operation, she died at the county’s People’s Hospital when rescue efforts failed. The county has now applied for a medical malpractice review of death of a pregnant woman. The department that handled the operation has been ordered to suspend operations and reorganize, and the responsible persons are being investigated.