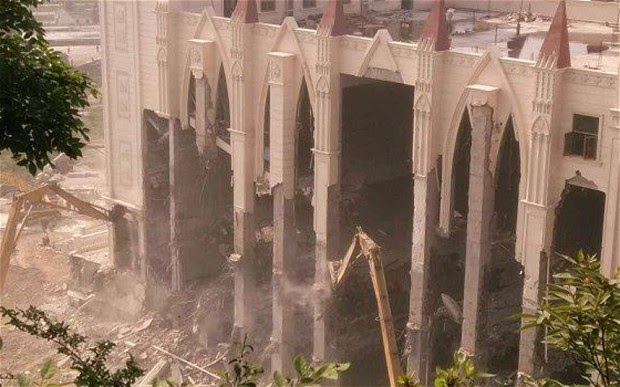 The Chinese government began demolishing parts of Sanjiang Church in Wenzhou on Monday, breaking a previously made agreement that would have left the 160-foot-tall church largely untouched. In the past week, officials detained several church members and monitored the electronic communications of others, according to Texas-based ChinaAid.

The registered church made headlines in early April as thousands of Chinese Christians surrounded the building in an attempt to stop the demolition. Government officials in the Zhejiang province said the crackdown is part of a campaign to get rid of illegal buildings, but church members see it as a specific attack on churches in an area where Christianity is booming. About 15 percent of the citizens in Wenzhou are Christians.

International coverage on Sanjiang and its human shield led to a compromise. The government agreed to leave the church untouched, and the church agreed to demolish several floors of an annex building used as a care facility for the elderly. But two weeks later, police blocked the roads to the church and began making demolition threats again. About 3,000 Christians gathered at the church to pray and guard the building, ChinaAid said. Churches around the city held fasts last week for Sanjiang Church.

But on Monday, people posted photos on social media sites of excavators ripping down large sections of the $4.8 million, gothic-style edifice. Witnesses told London’s Telegraph they saw about 100 police officers, some armed, around the blocked-off church. A local Christian told ChinaAid President Bob Fu that the cross on top of the building has fallen down.

“This brutality against the will of the believers, even breaking its own promises, basically erodes all the remaining trust between believers and the Chinese government,” Fu said.

ChinaAid received reports that police detained Rong Hua, a missionary from Sanjiang Church, Tuesday and placed him in criminal detention. Other church members, including an elder and a deacon, have been taken into custody and interrogated, ChinaAid reports. Some church members told the aid group that the government offered to release the detained members if other Christians would sign an agreement allowing the demolition to proceed.

Elsewhere in the province, hundreds of churches—both registered and unregistered—have been threatened with demolition if they don’t get rid of the crosses on their buildings, said Fu. In the past week, authorities have targeted smaller churches as well: More than a hundred officers surrounded Baiquan Church in Zhoushan Thursday morning, taking down the church’s cross and tearing down its walls. The officers then rebuilt the walls and rehung the cross in a less conspicuous place. On the same day, a Catholic Church in Pingyang Count was leveled.

Even the head of the state-sanctioned Nanjing Union Theological Seminary, Chen Yilu, spoke out against the government’s actions, according to the Telegraph. He called the government’s handling of the churches “crude and hard-line” and urged Beijing to “intervene as soon as possible to avoid further deterioration.”

Many Christians turned to Weibo, China’s microblogging site, to vent their frustrations. Caoyuan Zhibing wrote: “Today the Wenzhou Sanjiang church is being demolished, where will our more than 1,000 believers gather after this? Why tear down our church?”