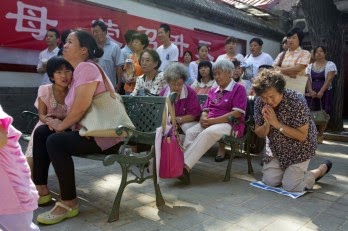 But during research for his dissertation, pastor and missionary Timothy Conkling found a completely different story. Of the hundreds of house church members he interviewed, “never once was there talk about overthrowing the government,” even if they had issues with certain aspects of the government’s policy. Led by a theology of martyrdom, house churches view persecution as a privilege, and thus do not respond violently against their oppressors.

Conkling’s published dissertation, titled Mobilized Merchants—Patriotic Martyrs: China’s House-Church Protestants and the Politics of Cooperative Resistance (available on Kindle and Amazon), is a careful analysis of the current relationship between the unregistered house church and the government, and gives a fascinating glimpse into a world few have access to. Since the late 1980s, Conkling has made more than 100 trips to China, where he’s developed relationships with house church leaders and watched Christianity flourish from a grassroots level.

Drawing from a large variety of examples, Conkling points out the church’s “cooperative resistance” in dealing with the government. First, churches try working with the government to solve disputes, such as writing letters that call officials to follow the rule of law. When that doesn’t work, they reach out to international players such as ChinaAid or U.S. senators to plead their case. If persecution still continues, church leaders accept it as a testing of their faith, a badge of honor for Christians. In one story, Conkling describes meeting an evangelist who hung her head saying, “I am so ashamed I never had the privilege of suffering for my Lord.”

The book also looks at different facets of the house church movement that are lesser known: how charismatic healing led to explosive church growth in rural areas, the dangerous cults that have formed under the banner of Christianity, the unique situation of Wenzhou churches, and the work of Bob Fu, head of ChinaAid.

One interesting survey found more than 90 percent of house church Christians in Henan province said they converted to Christianity because of miraculous healing—whether they experienced it themselves or heard of a friend who was healed. Especially in rural areas, the concept is easy for the Chinese to grasp, as traditional religions also call on spirits to fix their current circumstances. While many stay in the church and grow in the faith, some find their faith faltering when healing doesn’t happen.

The chapter examining churches in Wenzhou, known as “China’s Jerusalem” for its high concentration of believers, has a timely significance: The government started tearing down the crosses of Wenzhou churches in April. While Conkling’s dissertation was written before the latest attacks, he noted his thesis still stands: Churches tried to peacefully resolve the issue and never turned violent against the government. When police showed up with bulldozers, church members surrounded the buildings praying and singing hymns to prevent the demolition. In some cases, police in riot gear cleared the crowds, or the sheer number of protesters caused officials to turn their bulldozers around.

“I disagree with people who make these bold assertions that the Communist Party is trying to stamp out Christianity in China,” Conkling said regarding the demolitions. “They are trying to show the people that the party is in control … it’s symbolic.” The Communist Party realizes that trying to quash Christianity would cause the thing they fear above all else: instability. Instead, they want the appearance of control, so they attacked the appearance of the city rather than the people. Even though the streets of Wenzhou are no longer filled with the glow of red crosses, churches are still allowed to meet weekly.

Another sign of increased religious freedom: Although government officials knew the topic of Conkling’s dissertation, he was never arrested or barred from returning to the country.

“Yes, there are numerous human rights violations [in China], and we should be concerned and use international appeal to stop them,” Conkling said. “At the same time, by vilifying the government as a whole, we are failing to give credit to people who are trying to make changes.”