Critics of China’s one-child policy appear to have sensed a shift in momentum.
A group of 15 prominent Chinese scholars issued a open letter on Thursday calling for a rethink of country’s family-planning laws, arguing that the law in its present form is incompatible with China’s increasing respect for human rights and need for sustainable economic development. 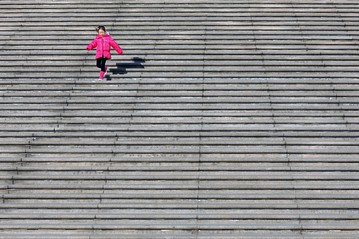 A child plays on steps during sunny weather in Beijing.

It was the second open call for reform of the one-child policy this week, and comes less than a month after the shocking story of a seven-months pregnant woman forced undergo an abortion ignited a firestorm of anger online.

“The birth approval system built on the idea of controlling population size as emphasized in the current ‘Population and Family Planning Law’ does not accord with provisions on the protection of human rights contained in the nation’s constitution,” the authors of Thursday’s letter wrote, adding that a rewriting of the law was “imperative.”

“This is a time during which people all over the world have realized there are problems with the (one-child) policy,” Mr. Liang, the co-founder and CEO of Ctrip.com, China’s largest online travel site, told The Wall Street Journal in explaining why the authors decided to publish the letter this week.

Mr. Liang, who has spent the past five years pursuing a PhD in economics at Stanford University and just published a book challenging the notion that China has too many people, said he has felt a recent opening up of discussion around the one-child policy.
Family planning has been a hot topic of conversation on China’s Internet ever since mid-June, when graphic photos of 23-year-old Feng Jianmei lying on a hospital bed next to her seven-months old fetus were posted online. According to family members, Ms. Feng—who already has a 5-year-old daughter—was forced to terminate her pregnancy after she and her husband failed to come up with the cash to pay a 40,000 yuan ($6,300) fine for having a second child.

The forced termination of Ms. Feng’s pregnancy — for which the local government has apologized — drew widespread condemnation and prompted calls for China to eliminate the one-child rule.

Researchers with the Research Development Center, a prominent government-affiliated think tank, added their voices to the chorus on Tuesday with an open call for Beijing to consider revising the policy, though they made no mention of Ms. Feng. Instead, the researchers focused on China’s rapidly aging population and a predicted dearth of young workers that some have said could bring about a demographic crisis.
Though it gestured at the ominous economic implications of the one-child policy, Thursday’s letter focused much more on issues of law and reproductive rights, specifically mentioning the furor over Ms. Feng’s forced abortion as evidence of the need for reform. “Behind these incidents are clear limitations and defects in the nation’s family planning laws,” it read.

Mr. Liang, who advocates a complete dismantling of the family planning system rather than the two-child system put forward by others, said he initially became interested in the one-child policy when he came across research showing that innovation and entrepreneurialism are dominated by young people. He said he feared a shrinking population of young people would hamper the country’s efforts to evolve beyond being merely the world’s factory.

Population experts note that prominent figures have called for changes to China’s family planning laws before, so far to little effect. China has loosened restrictions on some couples and is considering pilot schemes in several cities that would loosen the restrictions even further, but hopes for nationwide reforms have been dim.

That history is not lost on Mr. Liang. “In the short-term, there isn’t a lot of incentive to change things,” he said. “The aim is to get people thinking more about this now so that we can solve the problems in the long term.”