Chen Asks for Passage to U.S., Leading to Biggest Diplomatic Crisis in Years

The Wall Street Journal By KEITH JOHNSON and JOSH CHIN in Beijing and JAY SOLOMON in Washington Updated May 4, 2012, 10:31 a.m. ET 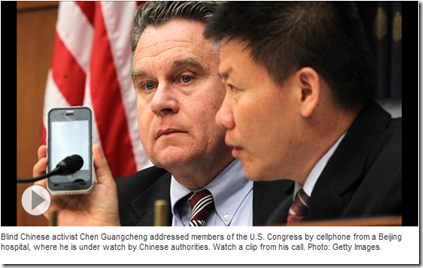 Blind Chinese activist Chen Guangcheng addressed members of the U.S. Congress by cellphone from a Beijing hospital, where he is under watch by Chinese authorities. Watch a clip from his call. Photo: Getty Images.

A dramatic day of negotiations over the fate of a blind Chinese dissident ended with the most extraordinary moment yet in the week-old affair: Chen Guangcheng addressing a U.S. congressional panel over a cellphone held up by an American Christian activist.

Mr. Chen phoned into a Capitol Hill hearing from his hospital room in Beijing and requested free passage to the U.S. “I want to come to the U.S. to rest. I have not had a rest in 10 years,” Mr. Chen said. “I’m concerned most right now with the safety of my mother and brothers. I really want to know what’s going on with them.”
He also asked for a meeting with Secretary of State Hillary Clinton, in Beijing until Friday for economic talks. “I hope I can get more help from her,” he said, his comments translated to a congressional briefing room filled with lawmakers, journalists and human-rights activists.

Amid mounting criticism, U.S. officials reignited talks with Beijing over the fate of Mr. Chen, whose about-face on a deal keeping him in China threatened a cascade of diplomatic and political embarrassments. The direct appeal to Congress by an activist under Chinese watch heightened the stakes in one of the most serious U.S.-China showdowns since China seized a downed U.S. reconnaissance plane in 2001.

Mr. Chen’s surprise call seemed to settle any lingering doubts about his current wishes and sharply illustrated how rapidly the case was morphing into a dire political challenge for President Barack Obama and the White House. Republicans, including presidential hopeful Mitt Romney, demanded the White House take steps to ensure the safety of Mr. Chen and his family. Critics questioned whether the Obama administration hurried the deal surrounding the dissident’s fate to solidify its standing with Beijing ahead of the high-level U.S.-China Strategic and Economic Dialogue meetings Thursday and Friday.
Developments Thursday also raised questions about the deal negotiated by State Department officials for Mr. Chen’s relocation within China that collapsed Wednesday in a drama that unfolded hours after he left the safety of the American embassy.
Throughout Thursday, U.S. officials insisted Mr. Chen had had a “change of heart” and diplomatic officials scrambled to ascertain what he really wanted, meeting with him and his wife at a Beijing hospital where he is undergoing treatment for injuries sustained during a risky escape from his home detention.

But as U.S. officials worked to salvage the deal, they were confronted with a far more challenging negotiating environment—and the likelihood of rising Chinese impatience.
In a strident editorial published Friday morning, the state-run Beijing Daily newspaper portrayed Mr. Chen as a “tool and a pawn” of U.S. politicians seeking to undermine China. “Packaged by the U.S. and Western media, this so-called ‘rights defending hero’ has been given an eye-catching political label,” the editorial said. “But Cheng Guangcheng doesn’t represent a majority of people. All he truly represents are the interests of his backstage bosses and Western anti-China forces.”

U.S. officials said Mr. Chen had insisted that he remain in China right up to his departure from the embassy on Wednesday. Activists, U.S. officials and others have suggested his change of heart came after he reached the hospital Wednesday. A person familiar with the matter suggested that only when reunited with his wife did Mr. Chen grasp the gravity of the security situation, leading to a desire for a wholesale escape for the family.

In an interview with The Wall Street Journal Thursday, Mr. Chen cited the treatment of his family after he fled de facto house arrest in Shandong province on April 22. “While I was in the embassy, the situation back home was awful,” he said. Local authorities “were in my house, in my room. They wouldn’t let my family close the door.”
“I feel my family members aren’t very safe in China,” said Mr. Chen. In a separate interview, he said he is in good health “but my heart is tired.”

Mr. Chen said he wasn’t bitter toward the U.S. embassy over the affair. “I feel the work the embassy has done with this business has been not bad,” he said. “I understand completely that this is something they can’t solve on their own.”

U.S. officials also began negotiating again with Mr. Chen and his wife, Yuan Weijing. It wasn’t clear how much access they had; U.S. officials said they spoke only by phone with Mr. Chen, who was with his family at Chaoyang Hospital. Mr. Chen said on Thursday that U.S. officials had told him that they weren’t permitted inside the hospital.
“We need to consult with them further and get a better sense of what they want to do, and together consider their options,” said a State Department spokeswoman.

The Capitol Hill hearing was set up by a commission formed to monitor China’s human rights record. The Congressional-Executive Commission on China is led by two Republicans, Christopher Smith of New Jersey and Frank Wolf of Virginia.

Mr. Wolf said he would introduce a bill seeking access to all State Department and White House communications related to Mr. Chen’s case. “The Obama administration has a high moral obligation to protect Chen and his family,” Rep. Wolf said.

Also testifying was Bob Fu, a Chinese-American pastor and rights activist who was in touch with Mr. Chen during his flight last week from his home.

State Department and White House officials have denied allegations by Mr. Fu and others that the U.S. passed on threats from Chinese officials. Administration officials have confirmed that Mr. Chen was informed that his wife and children would be returned to Shandong province if he didn’t leave the embassy. But getting sent back implied his family could be subject to further abuse, activists say.

Mr. Chen in the interview left open the possibility he could return to the embassy, where he sought safety on April 26. “The U.S. Embassy never said whether or not I could go back after getting out of the hospital,” he said.

It is unclear whether Chinese authorities would permit such a move. Chinese media coverage of the Chen affair has been almost nonexistent, but on Wednesday, the state-run Xinhua news agency ran an article on Mr. Chen, which cited a Foreign Ministry spokesman as criticizing U.S. meddling in Chinese affairs.

Officials said the potential for getting Mr. Chen out of the country was complicated by the need to get permission for him as well as for his wife and two children.

Still, Mr. Chen’s public disagreement with the U.S. has drawn more attention to his situation, potentially making it hard for China to move against him without facing criticism.

“He has the protection of world opinion,” said Jerome Cohen, who is with the Council on Foreign Relations and an adviser to Mr. Chen. For Beijing, “he’s an embarrassment…. If I’m the Chinese government, I may say we just want him out of here.”

Ambassador Gary Locke said Thursday U.S. officials repeatedly asked if Mr. Chen wanted to go to the U.S., and were told no. He also said Mr. Chen would have been allowed to stay at the embassy for years rather than accept a deal he didn’t like and wasn’t pressured to leave.

Among the concerns about safety for his family, Mr. Chen—a self-taught legal activist—expressed an interest in studying law and asked for protections for activists who helped him and met with him after his escape. He also asked for a probe of the local authorities who held him at home without arrest or charges.

Discussions heated up Tuesday, U.S. officials said, when the U.S. presented an offer to Mr. Chen and a response from China with specifics about which universities he might be allowed to attend to study law. Mr. Chen declined the offer, Mr. Locke said, demanding to speak with Chinese Premier Wen Jiabao.

What Mr. Chen needed was a demonstration of faith from China, Mr. Locke said. The activist asked officials if the Chinese government would send his family to Beijing. U.S. officials passed on the request and his family arrived by train in Beijing. Mr. Locke said Mr. Chen continued to be asked if he was comfortable with the decision to leave the embassy until he got into the van to go to the hospital.

Once reunited with his family, Mr. Chen gave his final assent to the deal, Mr. Locke said. But by that evening, after calls from other activists, Mr. Chen began telling reporters he had changed his mind. He cited what his wife said were threats of bodily harm from security forces who tied her to a chair for two days and threatened to hurt her after he had escaped.

A version of this article appeared May 4, 2012, on page A1 in some U.S. editions of The Wall Street Journal, with the headline: China Activist Now Wants Out.