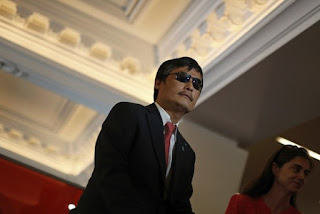 NEW YORK—Chen Guangcheng, the Chinese dissident who escaped informal house arrest in 2012 and fled to the U.S., will leave his post at New York University and is in negotiations to move to Fordham University in New York City, university officials said Thursday.

NYU officials said Mr. Chen’s departure wasn’t related to its agreement with Chinese officials to open a Shanghai campus, which will have its first undergraduate class in September. NYU spokesman John Beckman said the Shanghai campus was approved after Mr. Chen’s arrival as a visiting scholar at NYU in May 2012.

“The plain fact is that these are unrelated matters,” Mr. Beckman said. “In countless hours of conversations involving the establishment of our Shanghai campus, this matter has never come up.”

“No political refugee, even Albert Einstein, has received better treatment by an American academic institution than that received by Chen from NYU, and I am grateful to the university administration for its extraordinary generosity, which could not reasonably be expected to go on indefinitely.”

Mr. Chen was a prominent critic of China’s one-child policy and was imprisoned for five years and then placed under informal house arrest for two years before a dramatic escape. He sought help at the U.S. Embassy in Beijing and after a frenzy of diplomatic activity China allowed him to leave to leave to take up a visiting scholar post NYU.

Mr. Beckman said in an email that NYU and Mr. Chen had discussed beginning last fall that NYU couldn’t support him indefinitely. The university had provided Mr. Chen, who is blind, with housing, health insurance, food, clothing and electronic equipment, along with an office and language translation support. He said Mr. Chen was working on a book that would be a source of income for him and his family.

“We indicated that beyond this academic year he would need to make a transition to a more self-supporting life—with which NYU would and has been helping him—which would involve him finding new living arrangements,” Mr. Beckman said.

A spokesman for Fordham, a Roman Catholic university, said its officials were in negotiations with Mr. Chen. He declined to comment further.

—Jeremy Page in Beijing contributed to this article.