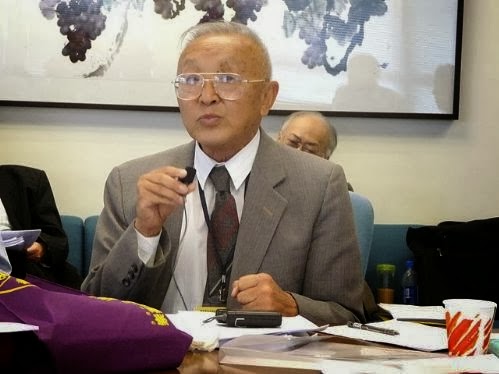 
Wu Yaozong is the founder of China’s Three-Self Patriotic Church. The Chinese Communists call him a “role model for patriotic religious people” while many Christians call him “the traitor of Christianity.” Wu Zongsu, who has immigrated to America, is Wu Yaozong’s son. Recently, in a seminar held in San Francisco on China’s religious freedom, he talked about his own father Wu Yaozong and called Wu Yaozong a tragic figure.

Wu Yaozong was born in 1893 and died in 1979. In 1918, he was baptized at Beijing Congregational Church and then joined Beijing Congregational Church. After that, he went to America and studied theology. After he came back to China, he worked as an administrative secretary in a campus group of the National Association of China Christian Youth Society. He once worked as director of the Chinese branch of the Fellowship of Reconciliation organization. Prior to 1949, Wu Yaozong met with the Chinese Communist leader Zhou Enlai three times, and after 1949, he met and talked with the chairman of the Chinese Communists Mao Zedong five times.

Wu Yaozong’s son, Wu Zongsu, is 84, and he has a deep understanding of his father’s life. Wu Zongsu once wrote an article called “Fallen Flowers Have a Purpose; Flowing Water is Ruthless,” in which he wrote about the relationship between his father and the Chinese Communists. In talking about why his father Wu Yaozong followed the Communists and why Wu Yaozong, as a Christian who believed in God, identified himself with Marxism and Leninism of the atheist Communist Party, Wu Zongsu said: “He thought Christianity on the one hand and Marxism and Leninism on the other could supplement each other, and the purpose of this is to build an equalitarian society where there is no exploitation. Christianity tried to achieve this purpose through love, and the Communists tried to achieve this through class struggle. However, the two have many things in common. In 1949, my father was appointed as the chief representative from the religious circle in the First Political Consultative Conference. After that, he was the member of the Standing Committee of the First, Second, Third, Fourth and Fifth National People’s Congress.”

The most important thing Wu Yaozong did in his life was founding China’s “Three-Self Patriotic Church.” In September 1950, he published a declaration called “Channels through which China’s Christianity Makes an Effort in the Construction of a New China,” which is also known as the “Declaration of Renewal.” It calls on China’s Christians to realize “self-governance, self-support, self-propagation” and cut all its ties with overseas churches. In 1951, he launched a “denunciation campaign” within Christianity and criticized imperialism and pro-American Christians.

In 1954, “Committee of China Christians Three-Self Patriotic Movement” was officially founded, and Wu Yaozong served as its chairman. Christian activities that did not belong to the Three Self Movement were banned. Wu Zusong said: “There was an evil backstage manipulator behind everything my father did, and this manipulator was the Chinese Communist Party. The publication of the ‘Declaration of Renewal’ was originally for the purpose of correcting the erroneous religious policies of the Chinese Communist Party implemented after 1949. He wanted Zhou Enlai to issue an order to protect the religious freedom. However, after he met with Zhou Enlai, he made a turn of 180 degrees and never mentioned those errors. He told his congregations that they must break with the imperialists.”

Then, how did the “Three-Self Patriotic Church” founded by Wu Yaozong achieve the “three selves?” Wu Zongsu said: “‘Self-governance’ means they should govern themselves, and all the management personnel should be reviewed by the Communist Party, including assigning jobs for graduates from seminaries. ‘Self-support’—maybe churches at the grass-roots level have to support themselves, but the employees of the Three-Self churches are the employees of the state and they are paid according to their administrative levels. Those who go and visit overseas countries are all funded by the Chinese Communists, and they must be accompanied by the people from the Ministry for United Front Work. ‘Self-propagation’—The Chinese Communists have their own people in every church who know the content of sermons and have complete control of the church.”