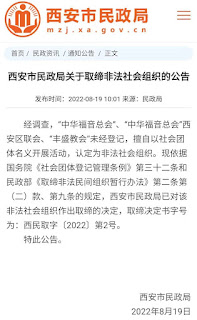 Xi’an Harvest Church has been officially shut down

(Xi’an, Shaanxi Province—August 23, 2022) On August 19, 2022, Xi’an Harvest Church, a house church in Shaanxi, has been officially shut down by the Xi’an Municipal Bureau of Civil Affairs.

The shutdown announcement issued by the Xi’an Municipal Bureau of Civil Affairs stated:
The investigation shows that “China Evangelistic Mission Ltd.”, “China Evangelistic Mission Ltd.” Xi’an Branch, and “Harvest Church” organized events in the name of NGO without authorization, so they are regarded as illegal NGOs. Pursuant to Regulations on the Administration of Registration of Social Organizations issued by the State Council, Article 32, and the Interim Measures for Banning Illegal Non-Governmental Organizations issued by Ministry of Civil Affairs, Article 2 Clause 2 and 9, Xi’an Municipal Bureau of Civil Affairs has decided to shut down the illegal NGOs and the code of the shutdown document is Xi Civil Shutdown Doc [2022] No. 2

Since July 20, 2022, at least 20 members of Xi’an Harvest Church have been summoned and questioned one after another by the Shilipu Police Station. Some members’ homes were searched multiple times. The senior pastor of Xi’an Harvest church, Lian Changnian, released a letter and prayer request on August 10 detailing the persecution of the church members by the police.

He wrote, “According to Christians who were summoned, one police officer named Zhang Haibo demanded them to hand in the church’s offering, sue the pastor over fraud and spreading a cult with fake evidence, and even make up stories and exaggerate the amount of offering by using job and kids’ education as a threat. Police Officer Zhang Haibo trapped the summoned Christians to say that the pastor paid himself 50,000 yuan each month and told them that more offerings they said they gave, more money would be retrieved.”

Pastor Lian Changnian is one of the older generation pastors of Henan “China Gospel Fellowship”—one of the five largest house churches in China. He has served in churches for over forty years and has been persecuted enormously for his faith in the past few decades, such as being arrested, beaten and imprisoned. Later, he planted the Harvest Church in Xi’an.

Pastor Lian Changnian wrote in the previous prayer request, “Xi’an Harvest Church has faithfully practiced the teachings of the Bible since it was planted 30 years ago, loving God, the home country, neighbors, and obeying the authorities. Harvest Church teaches people to give offering voluntarily based on the Bible, and coworkers manage it themselves with transparency. Pastors are not involved in either money or finance, which is known to all Christians, so the fraud charge is ridiculous. We would like to ask who gives them power to trample on citizens’ religious freedom granted by the Constitution?”

Chinese authorities have arbitrarily charged pastors of house churches with fraud in the past few years such as Elder Zhang Chunlei of Ren’ai Church in Guiyang and Elders Hao Ming and Wu Jiannan of Grassland Church in Deyang.