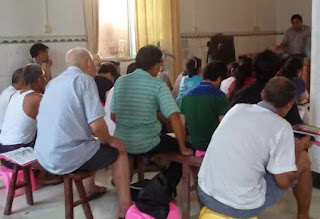 The Christians were members of the Wujiaqu Local Church, the church of the 105th Regiment of the Construction Corps and delegates from surrounding area. Officers took more than 10 of these individuals into custody during the raids, which occurred from March 1-3; these were released after midnight following their apprehension.

The four Christians who were placed under administrative detention filed their reconsideration applications with the Xinjiang Construction Corps’ Public Security Bureau, Division 6.