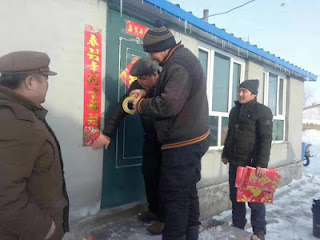 An anonymous Kazakh man living in Xinjiang spoke to ChinaAid before the holiday, saying his people do not celebrate the Spring Festival—which marks the lunar new year—but rather have their own traditional new year’s celebration, which begins on March 21. He said, “However, every Uyghur and Kazakh family is forced to celebrate the Han people’s Spring Festival, posting banners [around the door] and hanging big, red lanterns, according to Han tradition. Also, we are required to wear the traditional Han costume and [perform] the traditional dance. We are not allowed to wear our own ethnic clothing.”

The source also said that during his people’s new year, also known as Nowruz, every family eats millet, rice, wheat, cheese, and meat, wears their own traditional clothing, and visits one another to wish each other well. Songs are sung, and people dance together.

Another member of Xinjiang’s mostly Muslim ethnic groups took trouble with the use of the color red, which is often seen in Chinese new year celebrations, and the use of fireworks, saying, “We Muslims don’t like red and don’t play with fireworks.”

He went on to say that Xinjiang authorities have banned houses displaying the cultural characteristics of these minorities in the past few years, and even forbid the observance of “wedding and funeral traditions and religious rituals,” despite forcing the people to observe the Han holiday. In response, the informant said, “Culture should not be imposed on others. We have no freedom of life and survival.”

Another person said that according to the Chinese authorities, “There is only one voice and one goal-oriented policy, and that is: change everyone into Han people. It is impossible. This cannot be, because this will cause other ethnic minorities to be viewed as abnormal. This is a crime of encroachment.”

Additionally, many experts estimate that as many as three million Muslim ethnic minorities are imprisoned in concentration camps within Xinjiang. Publicly, Chinese authorities purport that they are only educating the inmates, but multiple former prisoners have spoken out about the torture, starvation, and brainwashing they received while being held there. Some even say that prisoners are being forced to work long hours in factories with little or no pay, and preferential treatment is given to those who pledge allegiance to the Communist Party.

China claims these measures prevent terrorism, but the people they target are often individuals who perform commonplace actions, such as making plans to visit family abroad, speaking their native language, or asking if food is halal.