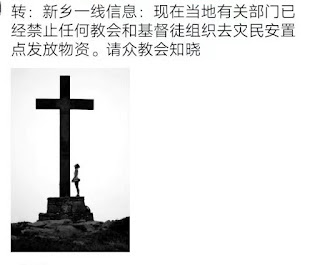 (Xinxiang, Henan Province—July 28, 2021) ChinaAid resources verified that Henan Province Xinxiang Municipal Bureau of Ethnic and Religious Affairs recently issued an order via phone banning Christians from participating in flood relief work in the name of churches or Christians. The ban orders Christians and workers not to mention their Church’s name while working and forbids them to discuss their faith or reveal their Christian identity. Chinese Communist Party (CCP) authorities warn those participating that they will force those workers who do not comply with this rule to leave the flood-ravaged area.

After destroying Zhengzhou, particularly Weihui City, located on the outskirts of upper Xinxiang, torrential rains severely flooded Xinxian. On July 23, in efforts to protect Xinxiang from total destruction, Henan Province Flood Prevention Headquarters initiated flood discharge procedures in Weihui City. As massive rains battered roads and houses, massive flooding left multiple villages and towns in Weihui in an emergency state. Due to the shortage of rescuers, flood waters threatened to destroy the entire city of Weihui.
By 1 am on July 24, the flood had hit 116 villages and towns in Weihui. Reports reveal that the monumental flooding adversely affected more than 1.7 million people, with more than 10,000 people not yet transported to safe areas.

After the unprecedented July 20 flood hit Henan, Christians, as well as individuals from non-government rescue organizations of Henan Province and other provinces rushed to Zhenzhou and participated in relief work. Some videos circulating online reveal that police and fire fighters acknowledge Christians’ work and cooperate with them. When one Christian team consisting of 40 workers from Wuhan encountered the local commander while helping rescue Zhengzhou people. he welcomed them, saying, “Oh, you guys are Christians…Great. Thank you all.” He introduced them to the director of troopers, and said, “You can ask him for help if you need any vehicles.”

Although non-government rescue organizations, including Christians, rushed to Xinxiang Weihui to rescue people from the flood, some authorities have harshly warned rescue workers…. Christians must comply with the ban on mentioning their identity or preaching the gospel to people affected by the flood.

Since a major earthquake shook Wenchuan on May 12, 2008, 1,060,000 volunteers (610,000 Christians) have participated in relief work and post-disaster reconstruction in China. CCP authorities banned Three self-churches from participating in relief work at that time. Three years later, when the Greater Chinese Democratic Jasmine Revolution broke out, however, as some volunteers helping Wenchuan participated in the event, CCP authorities forcibly dissolved all volunteer groups working in Wenchuan.

CCP officials also banned Christians’ help while the pandemic raged in Wuhan. They severely restricted non-government rescue workers and basically refused help from Christians, especially those associated with house churches. Some assert that while the CCP remains on alert for organizations with a Christian background, any non-government organization with house church association/history will not likely survive.

During late January 2020, seven house churches in Beijing jointly collected protective equipment for Wuhan churches. Early in February, however, police summoned organizers of the effort, and warned them to stop the event. Christians, home and abroad, donated money and supplies to Wuhan churches, hoping they could give these supplies to hospitals and individuals. Nevertheless, the Red Cross took many of the supplies. Police officers also confiscated donated supplies from churches, and escorted pastors to “drink tea” (translator’s note: police interrogate individuals).

Some local churches in Wuhan also raised money and collected supplies, hoping to donate these to government departments. As CCP authorities considered house churches (unregistered at Bureau of Ethnic and Religious Affairs) to be illegal organizations, local officials, concerned that accepting donations from these churches could cause problems for them with authorities, they refused the churches’ donations.

Some Christians, previously practicing physicians, planned to volunteer in hospitals located in the area hit hard by the pandemic, however, CCP officials rejected their applications. Wuhan Pastors Joint Prayer Meeting videoed a proposal asking Christians across China to fast and pray that the pandemic would soon end. CCP authorities ordered pastors to not only delete the video but to also end their proposal for Christians to fast and pray….

Despite the CCP’s routine constraints/persecutions on and offline against Christans and their crackdown on house churches in various regions, Christians and house churches continue to shine as light. As they participate in relief work, they also serve as salt, helping those affected/harmed by natural and human catastrophes overcome the ensuing difficulties.

###
You are the salt of the earth;
but if the salt loses its flavor, how shall it be seasoned?
It is then good for nothing but to be thrown out
and trampled underfoot by men.
You are the light of the world.
A city that is set on a hill cannot be hidden.
Nor do they light a lamp
and put it under a basket, but on a lampstand,
and it gives light
to all who are in the house.
~ Matthew 5:13-16 (NKJV)
China Aid exposes abuses in order to stand in solidarity with the persecuted and promote religious freedom, human rights, and rule of law. If you wish to partner with us in helping those persecuted by the Chinese government, please click the button below to make a charitable donation.