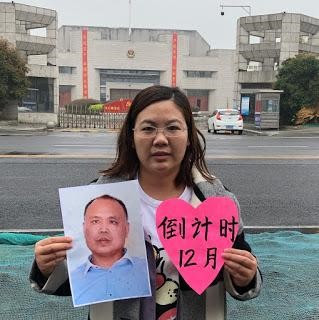 (Nanjing, Jiangsu Province—March 23, 2021) When Xu Yan, the wife of human rights lawyer Yu Wensheng, visited him in Nanjing Prison for the first time in three years on March 16, she noticed that the condition of his right hand had deteriorated and that his tremors had worsened. As he cannot hold chopsticks, Lawyer Xu can barely use his right hand to eat. He can no longer write. Ms. Xu also noted that her husband now has four teeth missing.

Prior to his arrest in 2018, Lawyer Yu (54-years old) relinquished his practice to provide legal counsel to one of the 300 lawyers arrested in the “709 Crackdown.” As a result, Chinese Communist Party (CCP) authorities arrested him for opposing their operation and his advocacy for constitutional amendment reform. In 2020, the court sentenced him to serve four years in prison, until March 1, 2022, for “inciting subversion of state power.” Following Ms. Yu’s repeated appeals for Lawyer Yu, the international community, as well as governments of numerous European and American countries have petitioned the Chinese government to release him.

Since being imprisoned for three years, Lawyer Yu’s health has increasingly declined. During her prison video visit with her husband, Ms. Xu asked authorities at Nanjing Prison to arrange for him to visit the orthopedics or neurosurgery department for a consultation and to receive treatment.

Since this year’s Spring Festival [another name for the Chinese New Year], food and nutrition at Nanjing Prison have reportedly deteriorated. As prison authorities do not allow Lawyer Yu to read books, his daily schedule primarily includes sitting or standing. For a while, as authorities have not provided a bed for him, Lawyer Yihas has slept on the floor.

During their visit, when Ms. Xu Yan started to inform Lawyer Yu about him being a nominee of the 2021 Martin Ennals Human Rights Award, prison officials abruptly interrupted her. They refused to let her tell him that he won the Award. They threatened, “if you continue to speak, [we will] cut off the phone.”

Ms. Xu had hoped to see Lawyer Yu at least once a month, but prison officials did not approve her request to visit him again in April.

###
The hope of the righteous will be gladness,
But the expectation of the wicked will perish.
~ Proverbs 10:28 (NKJV)
China Aid exposes abuses in order to stand in solidarity with the persecuted and promote religious freedom, human rights, and rule of law. If you wish to partner with us in helping those persecuted by the Chinese government, please click the button below to make a charitable donation.