Li Guozhi, better known as his alias, Yang Hua, has been serving a two-and-a-half year sentence in Guiyang, Guizhou, and has suffered multiple counts of torture on account of his work as a pastor.

Yang’s difficulties began when local authorities started targeting Huoshi Church, where he served as a pastor, by imposing fines on its leaders and conducting several raids in late 2015. On Dec. 9, 2015, officials interrupted one of the church’s services and took Yang Hua away when he tried to prevent them from confiscating a church hard drive.

The next day, they charged Yang with “the crime of obstructing justice” and “gathering a crowd to disturb public order” and sentenced him to two consecutive, five-day administrative detention sentences. When his wife, Wang Hongwu, came to collect him on Dec. 20, 2015, his scheduled release date, she saw him in a black hood and being forced into an unlicensed vehicle. She later learned that officials accused him of “illegally possessing state secrets,” and transferred him to criminal detention in a different facility.

For a month, Wang heard nothing from her husband, and prison authorities barred lawyers from meeting with him. The local procuratorate formalized his arrest on Jan. 22, 2016, upgrading his charge to “divulging state secrets.”

In March, officials finally permitted Yang to meet with lawyers, who uncovered the multiple counts of prosecutors illegally subjecting him to torture in order to force him to confess to his charges. They documented his torture in a transcribed interview, describing how authorities applied immense pressure to Yang’s toes and threatened to murder him and harm his wife and sons. As a result of his testimony, the attorneys sued the prosecutors for “using torture to extort a confession.”

At 9:30 a.m. on Dec. 26, 2016, a local court tried Yang, who entered the hearing room with two bailiffs holding his arms. Despite his request that the prosecutors who tortured him be excluded from the case, the court ignored his plea.

On Jan. 5, 2017, government personnel convicted Yang of his false charges and sentenced him to two-and-a-half years in prison.

During his time incarcerated, Yang began to develop health problems. Ulcers appeared spread Yang’s legs in March 2017 and spread rapidly. Due to the prison doctors’ inadequate treatment, the sores festered and rendered him unable to walk, leading to his hospitalization. Physicians diagnosed him with a critical case of vasculitis, and he was temporarily transferred to another detention center, where his condition improved. 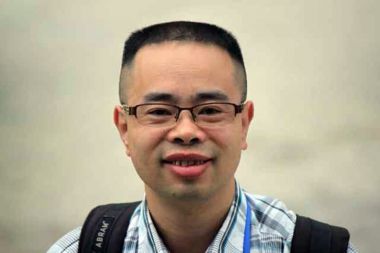