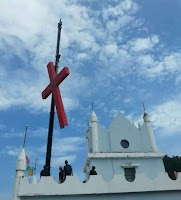 
(Wenzhou, Zhejiang—Sept. 2, 2015) Authorities in China’s coastal Zhejiang province once again stepped up persecution against churches on Sunday, including new registration requirements and various surveillance methods being employed throughout the heavily persecuted city of Wenzhou.

As of yesterday, Wenzhou churches are being forced to register their meeting places with the Wenzhou Municipal Public Security Bureau in addition to Wenzhou’s religious affairs bureau. In the past, the government tolerated the local Christian community so long as they didn’t cause trouble or draw attention to themselves.

Churches in Wenzhou are reporting that local authorities have positioned themselves both inside and outside of church buildings in an effort to monitor Christians’ religious activities based on a mandate from the Wenzhou Municipal Government on Sunday.

Christians reported that officials are even monitoring churches where police are not present. “At Fengwo Church, when pastors entered the church to preach, they found officials inside the church,” a local Christian said. “Churches are warning each other that officials from local governments are listening inside the buildings through surveillance cameras.”

“We are not used to their behaviors—putting their feet on the chairs in front of them, playing on their cell phones all the time,” said one Christian whose church service was occupied on Sunday. “When we were praying and singing, they stood in the doorway.”

China Aid also learned that at 9:30 a.m. yesterday, Zheng Zhonghua, a staff member at Zhongzhang Church in Wenzhou’s Longwan District, was interrogated by police. At this time, no other information on Zheng is available.

Authorities ongoing persecution campaign in Zhejiang province has affected as many as 1,200 churches to date with cross demolitions happening on a weekly basis. In addition, church leaders and lawyers defending churches are frequently detained. Last week, prominent human rights lawyer Zhang Kai and two of his assistants were detained; Zhang was sentenced to six months in a black jail for “endangering national security” and “gathering a crowd to disturb public order.” Pastor Yan Xiaojie was also detained and sentenced to eight days in administrative detention for sharing news of persecution in Wenzhou via WeChat, a Chinese messaging system.