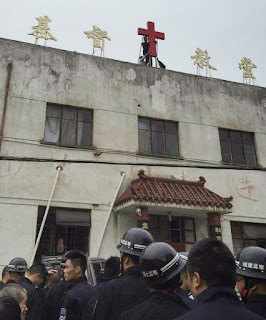 By Rachel Ritchie
(Hangzhou, Zhejiang—May 7, 2015) The provincial government in China’s coastal Zhejiang released a letter on Monday, asking Zhejiang citizens to send in their written opinions on the proposed regulations for religious buildings, including a condition that church crosses are only allowed on the side of church buildings. In addition, at least 15 churches’ crosses have been removed since April 30, and more than 10 churches received cross demolition threats.

The letter’s main request is for opinions regarding the condition that the “cross should … be completely attached to the front facade of the main religious building. The ratio of the length of the cross to the height of the building’s front facade must be less than 1:10 and the color must match the facade of the church and the ambient surroundings.” This condition would apply to both Catholic and Protestant Churches.

“This new proposal is yet another attempt by the government to legitimize its illegal, violent campaign of the destruction and removal of the cross,” China Aid founder and President Bob Fu said. “The cross is one of the fundamental symbols of the Christian church. To continue to forcefully remove the cross on the rooftop of church buildings demonstrates the Chinese government’s determination to contain the rapid growth of Christianity in China. The campaign should stop immediately, and all those Christians and church leaders who were treated violently and arrested should be released unconditionally. The responsible officials should be held accountable.”

“These stipulations are a typical case of the government interfering with religious freedom,” interpreted a China Aid correspondent. “This creates a legal foundation for the forced cross demolition campaign in Zhejiang province …, and, further, it creates an excuse for the campaign to continue. The proposed regulations state that ‘religious buildings should embody the local style and cultural features.’ … They obviously mean the so-called Chinese cultural features advocated for by the Three-Self Patriotic Movement churches, who are promoting the sinicization of Christianity.”

“[The Zhejiang government] now says that they want to return to traditional Chinese culture, and they think the cross is part of Western culture,” said Chinese House Church Alliance president, Pastor Zhang Mingxuan.

Despite the regulations’ provisional nature, China Aid received a report yesterday that the cross on Jingning Christian Church in the town of Hexi, in the city of Lishui, was removed by more than 100 officers from the Lishui Public Security Bureau, the religious affairs, urban management, and other government bureaus.

“Some church members were hugging the cross, refusing to let the officials take it down,” one Lishui Christian said. Despite church members’ efforts, the cross was removed from the rooftop of the 23-year-old church.

On Monday, Huzhen Church’s cross was removed from its church building in Jinyun County, Lishui. The cross was ignited when demolition specialists attempted to use a cutting torch to remove the cross.

More than 10 churches in the township of Fanshan, in Qingtian County, Lishui, received notices, demanding that the churches demolish their own crosses by May 10.

China Aid reported in late April and early May about four other cross removals and one other cross demolition threat.

“The main reason for these cross removals is that the persons in charge of the Lishui churches feel they shouldn’t fight the government,” a Wenzhou, Zhejiang, Christian said. “They think there’s no way they can win a fight against the government. In Wenzhou, there are still three churches that were ordered to remove their crosses, but the authorities have failed to do so. These churches are Xialing Church, Yazhong Church, and Zengshan Church.”

The campaign is responsible for the persecution of more than 425 churches in the form of cross removals/demolitions, church building or annex demolitions or conversions to public ownership, and/or demolition notices.

The campaign reportedly came to an end in December 2014. However, Zhejiang Christians reported that authorities held a meeting, in which it was declared the campaign would continue until 2016. Approximately 18 crosses have been destroyed in 2015 so far.

Bureau for ethnic and religious affairs and construction committees in various municipalities, Shaoxing Municipal Bureau for Construction Management, and all relevant entities:

Excerpt from the proposed “Zhejiang Provincial Codes for Religious Buildings”

4.5.4 Religious symbols of Catholicism are bell towers, crosses, the crucifix of Jesus and icons of Jesus. The cross should be made according to the tradition of Catholicism, and it should generally be completely attached to the front facade of the main religious building. The ratio of the length of the cross to the height of the building’s front facade must be less than 1:10 and the color must match the facade of the church and the ambient surroundings.

4.6.4 Religious symbols of Christianity are bell towers and crosses. The cross should be made according to the Christian tradition, and it should generally be completely attached to the front facade of the main religious building. The ratio of the length of the cross to the height of the building’s front facade must be less than 1:10 and the color must match the facade of the church and the ambient surroundings.

4.1.2 Religious buildings should embody the local style and cultural features