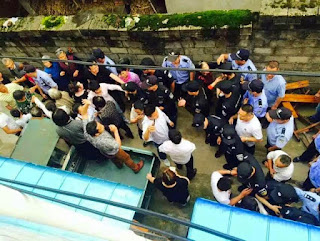 
(Lishui, Zhejiang–May 19, 2015) Shortly after Zhejiang authorities began circulating a provisional code regarding crosses affixed to Christian buildings, they removed 17 crosses in Lishui during a three-day period from May 7-9.

The cross demolitions began on May 7 in Qingtian County, Lishui, when authorities removed 12 crosses from local churches with little to no resistance from church members. Local Christians said that most of the targeted churches were built in the past two years and had all the necessary government approval.

“On May 8, the Wenxi Township Government in Qingtian County, Lishui, removed crosses from four churches,” Pastor Zhang Mingxuan, president of the Chinese House Church Alliance, said. “On May 9, one church’s cross in Liandu District, Lishui, was removed. Many people were taken into custody, and many church members were injured, including elderly people in their 70s-80s.”

In Wenxi, church members said that the government dispatched about 100 officers to demolish the crosses at Xiazhuang Church, Xizhuang Church, Shiniu Church and Dongan Church. Christians reportedly felt too pressured to resist the demolitions.

The cross demolition on May 9 occurred at Pingyuan Church in Liandu District, Lishui, where the authorities met resistance for the first time that weekend.

Church members said that three Christians were taken to the Bihu Township Police Station, including Zhao Lizhong, Zhuang Hequan and Hu Moxi. They also said that the 30-plus force of officers didn’t present legal papers ordering the cross’s removal.

Cross removals and church demolitions have been ongoing in Zhejiang since January 2014 when the “Three Rectifications and One Demolition” campaign began.