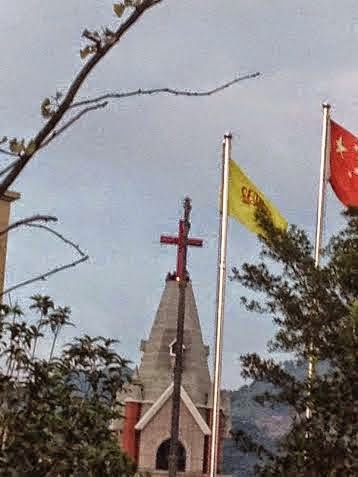 (Wenzhou, Zhejiang—Oct. 15, 2014) Two more churches in China’s coastal Zhejiang province were targeted for cross removal on Friday. Believers had been guarding the cross at one church in Wenzhou for more than three months when authorities took advantage of the Christians’ absence, due to harvest season, to demolish the cross.

“The cross of Xianqiao Church was taken down by force,” a church member said on Friday. “The worshippers who had been guarding the church’s cross were carried out by [authorities]. Nearly 10 brothers and sister from other churches, [who helped guard Xianqiao Church’s cross], were taken into custody.

“Zhou Zhanshuang, the leader of the Criminal Investigation Brigade of the Pingyang County Public Security Bureau, was at the scene commanding the operation,” the believer said.

More than 500 “temporary workers and armed police officers came to take down the cross…” according to a post by microblog-user “Wenzhenya-TEA.”

“The [officers] carried out people inside the church and chased or dragged away some other people,” another Christian said. “They went directly to the top floor of the church, to the audio equipment room. They then smashed the door leading to the cross. After smashing the door… it took them three hours to take down the cross.”

While in the church’s audio equipment room, police confiscated computers and other equipment and “destroyed audio equipment… [that] cost 500,000-600,000 yuan (US $81,630-97,940),” worshippers said. They also told China Aid they called the Wenzhou Municipal Public Security Bureau, the Pingyang County Public Security Bureau and the local police station for assistance, but no one came.

Three members of Xianqiao Church were taken into custody during the demolition and were released the following day. Officers also destroyed the cell phones of two women who tried to record the incident, believers said.

“For some of the people who came to guard the church, they didn’t open their stores and their factories have lain idle [for the past 100 days],” he said. “The farmers didn’t work their land. The past two days were for harvesting in the paddy fields, and most of them went for the harvest. During this time, the village leaders suddenly brought these people who climbed over the wall [of the church] and broke in.”

The same day believers reported that Xiachen Church in Taizhou, Zhejiang, was attacked and its cross was demolished. Persecution involving the demolition of church buildings, the demolition or modification of crosses, and/or the repurposing of church building into other facilities had affected 231 churches, according to the last official count by China Aid more than two months ago. Unofficial estimates say that the number of affected churches ranges from 350 into the thousands.