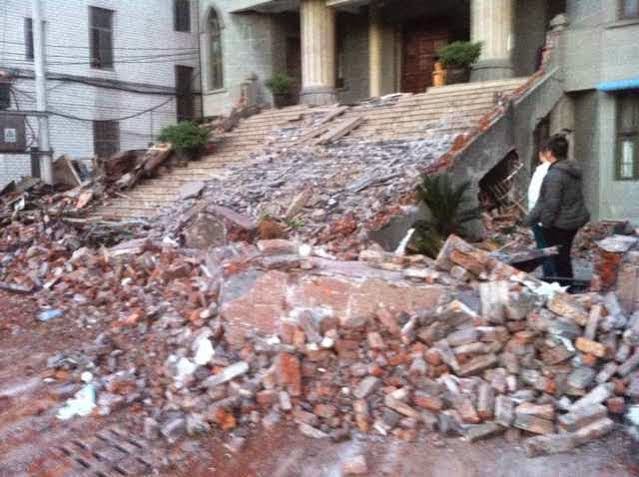 (Wenzhou, Zhejiang—Oct. 9, 2014) The effects of the province-wide “Three Rectifications and One Demolition” campaign continue to be felt by Christians throughout China’s coastal Zhejiang province, especially in Wenzhou. Early this morning, authorities in Wenzhou attempted to demolish the cross topping a church that has been guarded around the clock by Christians for the past two months; five other churches have reported persecution to China Aid since our last report.

Xialing Church, in Wenzhou’s Lucheng District, was attacked by more than 600 government employees and police officers early this morning. Hundreds of Christians were present, guarding the church just as they have been for the last two months.

In the process of demolishing the church’s wall, police injured at least three Christians, causing an elderly man to be taken to a local hospital for medical attention.

Officials finally gave up but told church members they would be back soon to demolish the entire church.

On Sept. 30, Christians reported that Gaoao Church in Yongjia County, Wenzhou, was confronted by several hundred government employees equipped with heavy machinery who succeeded in demolishing the church’s cross after a failed attempt in August.

Guankou Church in Wenzhou’s Taishun County was targeted for demolition on Sept. 29, but authorities were forced to abandon their efforts due to a strong storm.

“According to their original plan, the [authorities] would come to Guankou Church and take down the cross. However, there was a storm with thunder and lightning so there was no way they could do it,” a Wenzhou-area church employee said.

Church members told China Aid that Taishun County authorities sent Guankou Church a demolition notice on Sept. 28 that had been issued by the Taishun County Bureau of Housing and Urban Planning on Sept. 25. The notice stated that the church must withdraw from its building by 8 a.m. on Sept. or face “all the consequences.”

The cross on Wangxiang Church in the Ouhai District of Wenzhou was demolished on Sept. 26.

Wangxiang Church was formerly a house church but joined the local Three-Self Patriotic Movement in 2006. At that time, the TSPM granted the church a certificate for religious activities and provided services for the construction of the church’s building.

The cross topping Keqiao Church in Shaoxing, Zhejiang, was demolished on Sept. 25.

“More than 1,300 police officers were there…because the church is the largest one in Shaoxing and many people come to gather there,” a local said.

“More than 1,000 police officers surrounded the church, and the worshippers’ cell phone signals were shielded,” a worshipper posted in a message online. “The cross of the church was taken down [even though] all the paperwork for the church was there and there were no violations of the building codes. The [officers] are simply a bunch of robbers and thugs. Why didn’t they take it down in broad daylight? Now, in China, man’s will is greater than the law. How can they talk about a society under rule of law?”

There is also evidence that shows the government’s prior support of the church. The Shaoxing Municipal Religious Affairs Bureau’s website states, “This bureau conducted a review on the construction project of Keqiao Christian Church in Shaoxing County. Pursuant to Article 24 of the Zhejiang Provincial Regulation for Religious Affairs, our opinion on the review after research is as follows: We approve the construction project at Keqiao Christian Church in Shaoxing County.”

The website also says that on April 18, 2013, a completion ceremony was held at the new church building with more than 6,000 attendees, several of whom were individuals from the Zhejiang TSPM who were invited by the church.

Yazhong Church in Taishun County, Wenzhou, is also facing the demolition of their cross, and two church members have been detained.

Meanwhile, a Pingyang County, Wenzhou-based worshipper told China Aid that the Zhejiang government is planning to conduct a pilot program at Yongen Church in Cangnan County, Wenzhou. “They want to do something there like a harmonious society. There are strong repercussions for the church. The government wants to get involved in the internal affairs.”

Believers are also reporting that the large number of demolitions, as well as the failed attempts, has taken its toll financially on the Pingyang County government.

“The financial situation in Pingyang County is very bad,” a Christian said. “They want to take down the crosses, but they don’t’ have the money to do so. Now several hundred yuan is taken out from each public servant’s monthly pay. For some teachers, they aren’t even paid.”

There are also reports that demolitions are starting to occur outside of Zhejiang. Catholic churches in China’s central Hunan province and inland Jiangxi province.

Some believers have chosen focused on the government’s wrongdoing. “We have a government without trust, ethics or quality,” one man said. “They are destroying their own reputation with their bad behaviors. What do they get in return for such acts? All that they do will have consequences.”

However, other believers have said that the persecution against churches would only replenish the believers’ faith “Churches grow and expand amidst persecution,” a Christian woman named Wang said. “They can’t beat us. In the time of Moses, the more persecution the churches suffered, the faster they grew. In fact, the environment the churches find themselves in nourishes the revival of the churches.”